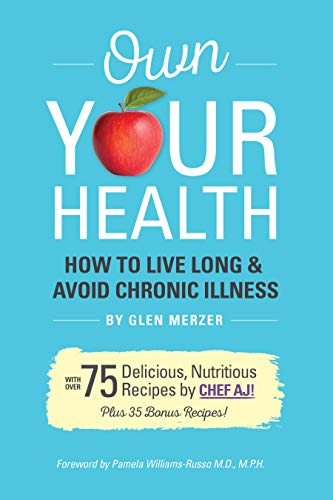 The other day, Chef AJ, author of “The Secrets to Ultimate Weight Loss” who has been an inspiration and guiding force in my successful weight loss journey (see https://lerner.net/milestone-more-than-half-of-me-gone/ and https://lerner.net/may-2022-biannual-health-test-results-whole-food-plant-based-is-the-way-to-go/), was discussing her ideas and recipes with me as I begin a test of some changes in my eating methods.

Note: Links to books mentioned here are my affiliate links in Amazon, and I may receive a small commission if purchases are made.

If successful, those tweaks could make things a bit more interesting and easier going forward. More on that next month after my test is complete. Either way, I’ll continue to eat healthy WFPB (Whole Food Plant Based) for the rest of my life. It’s proven to be a life saver, and I enjoy it.

Other people who have inspired me along the way include WFPB greats such Dr. John McDougall, Dr. Michael Greger, Dr. Dean Ornish, Dr. Caldwell Esselstyn and the ever-friendly Potato Strong guy. Lately Dr. Doug Lisle has also been giving me friendly and interesting advice and seems interested in my test. I think. Maybe he’s just being friendly. Anyway, I do appreciate them all and hope to meet and/or talk with them in person someday.

In the meanwhile, Chef AJ was telling me about updates to her recipes in a more recent book, “Own Your Health: How to Live Long and Avoid Chronic Illness” which she co-authored with Glen Merzer. She created the recipes section for the book and recommended some simple ones to me. I am famously not very “handy” in the kitchen, and have few cooking appliances. But she did think the more recent recipes had some benefit for me.

So I bought the book and read it yesterday.

The author is interesting. Apparently he’s a former comedian, and the book is filled with some interesting, funny anecdotes. I’m sure you would find it a worthwhile read.

His going on about roadkill vs factory-raised animals is hilarious.

Here he is talking about the endless confusion dieters have about carbs, where somehow popular opinion has twisted thinking of carbs as somehow evil:

“A chocolate croissant, for example, would be unhealthy because of the following ingredients it would likely contain: butter, eggs, milk, sugar, and cocoa butter. The butter, eggs, and milk are of course all animal ingredients high in saturated fat and cholesterol; the refined sugar is deleterious to everything from your teeth to your heart; and the cocoa butter in the chocolate adds significantly to the saturated fat content of the treat. The croissant would also contain refined flour, but the flour would be the least of the insults to one’s health. It’s not hard to imagine a person who ate even one chocolate croissant per day putting on weight, and then saying, “I’ve been eating too many croissants; I’ve got to cut out the carbs.”

Merzer and I also have some things in common. He’s the same age as me, and the same height, but I weigh 5 lb less than he does. Though he was apparently never obese, and I was most of my life, until a few years ago. My serum cholesterol is lower than his, though his is fantastic. He doesn’t take statins, though I take one a day, but I can go into that in another post.

And then there is Gary Taubes. Merzer grabbed me right away in his introduction where he wrote:

“An unanticipated thank you to Gary Taubes, whose views on nutrition vary widely from my own but who answered my queries with civility and openness.”

I have had my own lengthy back-and-forth with Gary Taubes, who is a low-carb “keto” author. I have more of a science background than Taubes, yet he has become a must-read in the keto community. I read Taubes’ book, “Why We Get Fat and What to Do About It” over 10 years ago when I was fiddling with keto diet experiments (all resounding failures). I have some blog posts about it, which you might find interesting:

Anyway, I agree 100% with Merzer’s conclusions about Taubes, so I was immediately drawn into the book.

Medical history, and what Merzer has to say about other WFPB influencers

Merzer talks about his family medical history. In retrospect I wish I never had a stent put in back in 2012. I was not experiencing pain at all. Just “something felt off,” I weighed 284 lb., my cholesterol was through the roof, and so was my HbA1c blood sugar. While in the hospital I decided to check out vegan eating, rather than just limiting calories to 1800 a day like my doctor suggested. That’s when I discovered Dr. Dean Ornish, and later on others in the field.

Merzer has interesting sections on the different WFPB influencers, including some things to say about Ornish and his less-than-perfectly-vegan approach. It’s worth reading, but I didn’t really care for his implied questioning of Ornish’s ethics because he allows for certain non-vegan foods, like no-fat dairy.

Still, there is a lot of interesting back and forth about different research studies and what different researchers and organizations have to say. Of course the conclusion is fact: the healthiest diet is whole food, plant based, no oils, no sugars, and as little processed food as possible. And there are lots of studies summarized in an easy-to-read way. So I recommend it not only for people who already know this, but for people searching for answers.

His whole section on culture-versus-science in what different organizations recommend has been mentioned elsewhere ad infinitum, but is always eye-opening to people not aware of it. Like the the Harvard Medical School researcher who famously said, “We can’t tell people to stop eating all meat and all dairy products. Well, we could tell people to become vegetarians. If we were truly basing this only on science, we would, but it is a bit extreme.”

The one chapter I was not convinced at all about was his claim that humans, as primates, are natural herbivores – not carnivores or omnivores. That doesn’t make sense for multiple reasons, going back to prehistoric times. Humans, and our ancestors, did eat animals since time immemorial. I don’t know why he thought trying to make that case was important. Maybe I’m missing a joke?

Every time somebody says something like eating vegan is natural my reply is, “It’s not natural at all. So what? Natural would be us dying at 20 years old like prehistoric humans did. We learn over time and improve.”

The actual facts are that, “The first major evolutionary change in the human diet was the incorporation of meat and marrow from large animals, which occurred by at least 2.6 million years ago.” https://www.nature.com/scitable/knowledge/library/evidence-for-meat-eating-by-early-humans-103874273/

Other primates are also omnivores, including baboons and chimpanzees. “Which primates, exactly, enjoy dining on flesh? Most of them, according to David Watts, an anthropologist at Yale University who analyzed over 400 studies of meat-eating among primates in a 2020 review paper. Watts noted that 12 of the current 16 families of primates featured meat-eaters, a total of 89 species. Rather than the exception, it’s the majority — even when meat comes with a potentially violent price.”

Those primates are not obligate carnivores like lions. But they are not naturally herbivores. And neither are humans.

Anyway, aside from that digression, it’s mostly an excellent read. I should mention that he does differ from Chef AJ on a couple of salient points. While Chef AJ is no salt he is ok with some salt if you don’t have blood pressure problems. I don’t have blood pressure problems (last check I was 101/59), but Chef AJ seems to think this is important. He also uses soy milk, as do I, for moistening potatoes. Chef AJ is down on that as well, because it’s higher in fat.

And there’s another side trip into health insurance and his seeming opposition to Medicare-for-all. Living in Japan, where we have national health insurance, I assure you: everybody having access to affordable health care is a good thing. End of discussion.

Finally, you get to Chef AJ’s updated recipes – the main reason I got the book, since she told me a few in her Ultimate Weight Loss book were now out-of-date (e.g. used nutritional yeast, which she doesn’t recommend any more). Not being a chef myself I’m still looking those over. The ingredients intro section is definitely interesting though. And informative. For example, even though I’ve used balsamic vinegar for some years now every day in my salad dressings, I had never heard of “reduced balsamic vinegar” before. It sounds interesting.

Chef AJ was recommending her Honey Mustard dressing/dip to me. It does look good, and simple to make. I need to get a blender though. In the meantime, her Easy BBQ Sauce sounds … easy!

Actually, after reading some of her more simple recipes (I’m not “handy” in the kitchen) it makes me want to get an easy-to-clean blender and try out my InstaPot cooker, which I bought three years ago and still haven’t turned on!

Again, here’s the link to the book – it’s a good read. Own Your Health: How to Live Long and Avoid Chronic Illness