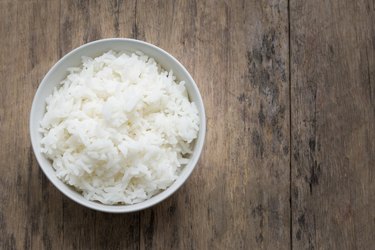 Whether you are just looking at calorie density and sticking to the left of the “red line” to help control your weight, or whether you are looking at total calories, rice, along with potatoes and some other starches are a great help when eating WFPB (whole food plant based).

But rice has a great variation in calorie density depending on how it’s cooked. If you’re watching your weight you might want to be aware of this.

While brown rice is considered the healthiest, and is also probably the tastiest, and also the most filling, white rice remains the most widespread kind of rice in most parts of the world. While you can certainly buy brown rice in supermarkets here in Japan, white rice is universally used in most homes and restaurants. Sometimes you might be able to find a brown rice onigiri (rice ball) at a convenience store, but they remain rare. WFPB practitioners, like Dr. McDougall, are ok with white rice too.

Regular cooked rice, made to normal density in a rice cooker, has a calorie density of 590 calories/lb. That puts it just to the left of the red line, and is certainly ok on your weight-control, WFPB-based diet. Of course you need to be somewhat careful not to overindulge, but it’s a great calorie bargain overall. And like most starches tends to be satiating. It’s a good way to complete a meal.

Onigiri (rice balls) tend to have less water in them because they are hard-packed and meant to be eaten by hand. Regular rice in a bowl would just fall apart in your hand. So onigiri have a higher calorie density. There are 179 calories per 100 g (https://calorie.slism.jp/101111/) which means its calorie density is 812 calories/lb. That is to the right of the red line. So while onigiri might be convenient to carry along with you, it’s easy to eat too many calories of them. If you’re just watching calories and recognize that a single onigiri might have 120 g = 215 calories in it, limiting yourself to maybe two for lunch could fit into your diet just fine. But just because they are made almost entirely of just rice, don’t think they have a low calorie density.

Japanese rice gruel is also just plain old rice. You can get them with nothing added, or with added condiments like pickled plums. Okayu goes in the opposite direction of onigiri – the calorie density is much less than regular rice you eat with chopsticks. And there is a range of choices, so you can find okayu you are comfortable eating.

While you can get brown rice gruel, white rice is most common. You can also get microwave packs, though most of the time you find packages to boil in water. Either way, they are great for lazy chefs!

Calorie density is as low as 172 calories/lb! (It just depends on the water ratio). That compares to 590 calories/lb for regular rice! Yet okayu is still satiating so it’s worth considering if you are watching your weight and want to complete your meals with a filling starch.

When shopping for senbei please be aware that some are made using oils and have added sugars. Some don’t have any oil at all. You have to shop around for the ones with the simplest ingredients. There are dozens of varieties. Some are easy to crunch on, and some might be quite hard. They are very tasty snacks. But because the water content is all but gone their calorie density can be quite high! The simplest senbei has about 190 calories per 100 g (https://calorie.slism.jp/200239/) which is a calorie density of 862 calories/lb. Here’s were it gets tricky. Because they are basically absent water content, they are extremely light, and so they are not very filling. They are basically grilled rice and air. You can mindlessly snack away on senbei all afternoon if you’re not careful. They are definitely better choices than, say, nuts. But still, they are not low in calorie density. They are definitely to the right of the red line.

Anyway, please just be aware that the calorie density of rice depends so much on how it is cooked you need to be careful. For weight control, okayu is something worth checking out. I find the 200 g packages at just 120 calories per package, which I can heat up in 90 seconds in the microwave, often a great way to finish off a meal. And even add a second one if I’m still hungry. So that would be just 120 calories or 240 calories for 200 or 400 g (almost a pound) of rice. If I had regular cooked rice instead it would be nearly 3 times as much.