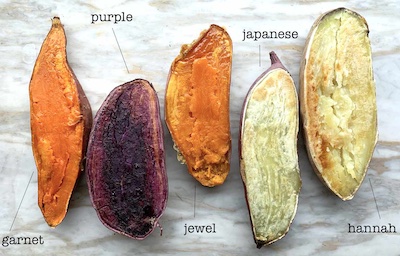 First let me say I know there is a difference between yams and sweet potatoes, though if you grilled me on it I could not give you details. And people mix up the names all the time. Some people will call these Hannah yams and others will call them Hannah sweet potatoes. For the purpose of this post I’m not going to pay attention to that point because I’m just talking about calorie density and calories here.

The answer to the question, though, is the calorie densities are enormously different according to trusted references.

According to Healthline, raw Hannah yams have 86 calories per 100 g meaning the calorie density (raw) is 4.54 x 86 = 390 calories/lb. Not much different from white potatoes. Just slightly more. Of course if you grill them the calorie density goes way up because you are removing water. I don’t have a precise figure on that. That’s one reason I use total calories instead of calorie densities. The calorie density of foods vary greatly depending on how you cook the food. Here’s a post I wrote on this recently: Rice and Calorie Density – some hints for weight loss. But regardless of how you cook them, the total calories stay the same. Anyway, not to digress….

Raw Japanese sweet potatoes are called satsuma imo in Japanese and have 132 calories per 100 g (https://calorie.slism.jp/102006/). That means their calorie density is 4.54 x 132 = 600. That’s 50% higher than Hannah yams (and most other sweet potatoes). While that is left of the red line, it isn’t necessarily the figure you use if you are following calorie density because who eats potatoes of any kind raw?

But note: You don’t have to grill the potatoes. You can steam or pressure cook them in an instant pot, in which case the satsuma imo will stay the same 600 calories/lb. That’s still 50% higher than Hannah sweet potatoes and more than 50% higher than regular white potatoes, but at least it’s to the left of the red line, if you just care about calorie density.

I’ll occasionally have a Japanese sweet potato. They are super delicious. When they are done well they are soft, moist, and sweet inside. But because of the higher calorie density and overall higher calories I tend to stick with ordinary white potatoes. I look forward to trying Hannah sweet potatoes on my U.S. trip next April though.