Two years, almost to the day, since Monta came to live with Mon I believe I just witnessed, for the very first time, them actually mating!

I can’t be 100% sure (on YouTube videos I’ve seen, it only takes 3 seconds, and is confusing to figure out) but let me describe what I saw.

I heard some odd sounds from the dining room and thought maybe they were having a fight. Mon had been standing in front of the left nest where Monta was all morning, staring in.

I came in and there was a flurry of feathers and squawking, and I thought they were having a fight for the left nest. But then they both got still and Monta was clearly sitting on top of Mon. That lasted for several seconds. Afterwards Monta left the cage.

Then Mon went to the right nest and laid and egg.

Just before I returned and saw Mon in the left nest where she had laid yet another egg (two in one day is a first) and get this – she was sitting there in the left nest unmolested. Monta was not carrying out his usual tantrums trying to throw her out of the nest. That’s also a first.

Monta is currently alternating between dropping by the left nest to poke his head in quietly, and swinging on his swing, and investigating the right nest where the other egg is. But he isn’t trying to throw Mon out of the nest. 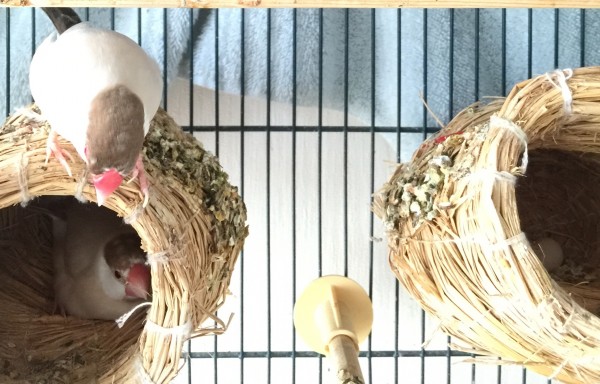