I am extremely frustrated with Apple after all these years.

I just heard back from the Apple liaison again. She says the engineering team claims my iPhone 7 Plus really is brighter but I just can’t see it, which makes no sense to me.

Nevertheless they are going to send out one more unit and see if it’s better. If you look at Apple’s home page at https://www.apple.com/iphone-7/ (see screenshot) in addition to claiming it is 25% brighter it says:

“So what you see will be noticeably more brilliant and vibrant.” 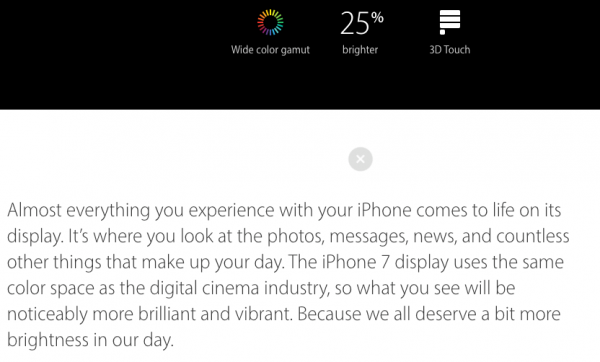 If something looks darker and looks dingier it is impossible to say it is “noticeably more brilliant and vibrant.” The word “noticeably” means something you can visually see. If you can’t see it, it isn’t noticeable.

Also, my U.S. friends’ iPhone 7 Pluses, when they visited last month, were noticeably brighter than mine.

I think Apple must admit there is a manufacturing quality enforcement issue going on. If there is such variation in display quality there must be something going on.

I do hope this next device change fixes the problem. If not, regrettably this will be my last Apple purchase. It becomes a basic trust issue at that point.

In that case I will have to decide how to “phase out” using Apple products. One example might be just keeping this iPhone 7 Plus until the end of the contract. Or maybe I’ll wait until after using it for 6 months. Then I can unlock it and sell it for a good price. At this point I wish I could reverse the entire transaction, but that doesn’t seem possible or practical at this point

If I give up using iPhones I will be in the market for an Android I guess. Something with a good camera and the other features I need. Though I am also tempted to go for a “middling” model of something so I no longer feel vested in having “the latest and best” product. When you have something in the middle you figure, “well, it’s in the middle, so I shouldn’t expect too much.” If you go for something that is supposedly the best, it’s irritating when it really isn’t.

If I give up my iPhone I may very well sell my MacBook Pro, which is in like-new condition after a final fix-up under AppleCare last month, and consider switching to a Windows 10 notebook computer with a touchscreen display.

I just went through the history of all the Apple devices I’ve used over more than a quarter century and now just feel weird about the whole thing.

I think I computers, and smart phones, should just be tools for practical purposes. I should never have gotten so caught up in it.

Anyway, I will test this so-called “last device” when it comes and see if it is an improvement.