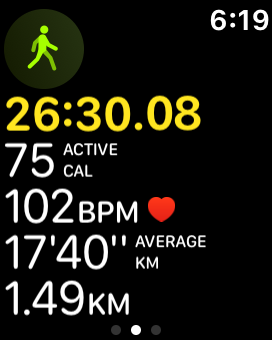 I have a Series 1, inherited from a friend who upgraded to a Series 4.

I really like the watch, but had felt that one of its shortcomings was calorie tracking.

It was syncing steps to MyFitnessPal just fine, but I was getting about 1/8th the calorie credit that I would get for the same workout when tracked in MapMyRun. And believe MapMyRun was correct, because I compared with charts of step counts and calories for a man my age and size.

This past week I started using the Watch Exercise app itself, turning on “Outdoor Walk” and trying that instead of MapMyRun. I was pleased to see it did better and actually gave results close to that of MapMyRun. In this case I would give benefit of the doubt to the Watch because it has more information – my heart rate in addition to the distance traveled. I guess distance is synced from my iPhone because the Series 1 doesn’t have a built-in GPS.

The Watch is convenient for an outdoor walk like this because I can glance at it and see how far I’ve done, how many calories I’ve burned, etc., without taking out my iPhone and opening up MapMyRun.

The only nuisance is that I need to confirm I’m still using it sometimes. It seems to think I’ve put it in pause mode accidentally at times. But at least it confirms it. Also, since using this feature I noticed I use up more battery during the day. But there is still at least 25% or more left by the time I put it on its charger at bedtime.

All in all, I think I’ll use the Watch for outdoor walks going forward.

Indoor cycling is another thing entirely though. If I turn on Indoor Cycling and start going it regularly gives me credit for only half the calories my indoor bicycle does. In this case, I would give the benefit of the doubt to the indoor bicycle because the bicycle has more info. It also tracks my heart rate (which matches that shown on the Watch very closely). In addition the bicycle knows the distance I’ve traveled, and the tension setting. It is more accurate I believe.

In this case the Watch is still useful because my bicycle is older and doesn’t automatically sync with MyFitnessPal. So the Watch creates a “placeholder exercise” when it syncs. Then I can go into MyFitnessPal and just adjust the calories.

In general, I think the device with the most info wins.

What I still don’t get, though, is why the Watch syncs steps to MyFitnessPal at all when not running the Exercise app if it’s only going to give a tiny fraction of the calorie credit. That’s what I was confused about at first. I had assumed it was going to be a continuous activity and calorie syncing device. But using the Exercise app seems ok too.

I don’t know how Fitbit works in this case. For example, with a Fitbit do you have to start and stop an exercise like on the Watch, or with MapMyRun on a synced iPhone?

Anyway, I’m happy to be using the Watch for even more things now.

Suggestions about better ways of doing this using the Watch are welcome.