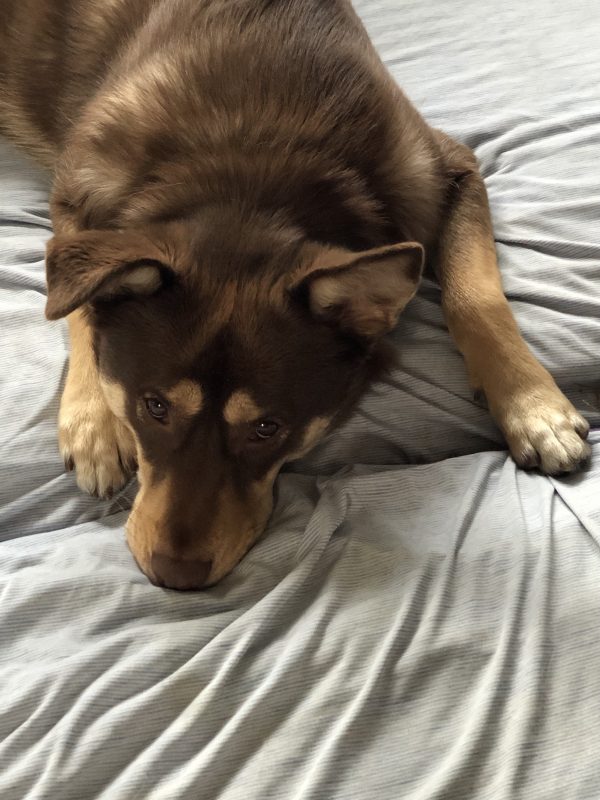 Pao and I decided to have a new start for 2021. Here is his album for a whole year: Pao’s corner

As you might know, his mother was a terrier and Japan dog mix, and she was less than half Pao’s current size. He doesn’t look anything at all like his mother. His father is (they claim) unknown. He was 1.3 kg when I got him a year ago, and now is up to 24.75 kg. He is often rather hard to control. Especially when leaping at motorcycles during walks. He’s really strong!

I’ve had two dog trainers visit a total of 7 times and that’s not really getting better, but wanted to let you know about something I actually solved this week!

First, on the positive side, Pao doesn’t bite, he gets along well with all other dogs (I’ve never seen him bark at or get angry at another dog), and he’s surprisingly gentle with little kids and older people, and will eat treats out of their hands. I think he’s trying to be good. I don’t feel I’ve really completely bonded with him yet, but we do sleep together, which is cute. When he is quiet. And I’m doing my best to evoke positive thoughts when he’s around.

The upstairs bedroom is where he spends most of his “down time” during the day. He likes relaxing on the bed upstairs. There are no crates (no place for them) but he doesn’t make messes upstairs or anything like that.

The issue I wanted to solve, though, is that after I go to sleep (I take out my blanket and put it on the bed and crawl under it) he starts off ok. But then all night like every 15 minutes or half hour or, if I’m lucky, every two hours, he’ll hear something, jump up, bark loudly, and start spinning in frenzies. And he will pull on and chew my blanket then too. I pet him, and try to calm him down, and then he will settle down and chew on a rawhide gum for a bit and fall asleep again. Until the next frenzy. I haven’t gotten a full night’s sleep for going on a year now.

I think the cause is that he’s hearing something outside that I can’t quite hear. It could be passing vehicles. I also suspect he can hear his sister, Anchiru, next door, who is left by herself all night, and is whimpering.

So… my question was just… how can I get a full night’s sleep? If I put him outside the bedroom he will just whimper until I let him back in.

And I found the answer!

It was suggested by a user at Reddit – white noise. I didn’t realize this, but apparently white noise is calming for puppies in situations like this. In fact it appears to also be calming for people.

I found a nice 10 hour recording on YouTube (https://youtu.be/NjB9g8KjPjE) and set up the old iPhone 6 Plus that was formerly the Monta-cam to play all night. It’s just uncanny how well it worked!

For the last two nights Pao didn’t bark or go into a frenzy even once. The first night he even overslept and let me sleep to an unheard of 6:30 am! Last night he didn’t even pull or chew on my blanket. It’s like a miracle.

I downloaded just the audio part of the YouTube and added it to the Music library on that iPhone and will just play it every night. It also has a soothing effect on me somehow. It’s like the sound of a gentle rain falling.

Anyway, Pao and I decided to have a fresh start for 2021. Wish us luck.

Update January 5, 2021: Third night in a row now of blessed peace all night, and almost an extra hour of sleep!

Update February 5, 2021: The barking frenzies are back. I’ve tried upping the volume on the white noise but it doesn’t help. He will start the evening ok. But then for no apparent reason at really bad hours, like 2 am, he’ll suddenly leap up and start barking. Really loud. At a frequency that hurts my ears. I can’t understand why. I can’t hear anything outside. Last night it happened like 5 times.Right now it’s daytime and he’s just resting in the next room. Outside I can hear all sorts of things: motorcycles, construction machinery, a neighbor’s dog barking. But Pao just yawns and relaxes. He barked just one time this morning. So why in the middle of the night? And how can I stop it? I’m sleepy…