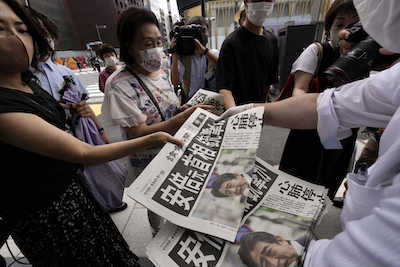 Everybody in Japan, and around the world, was shocked by the assassination last week of former prime minister Shinzo Abe, who was 67 years old. There’s really nothing I can add to the facts surrounding the event. Everybody knows by now that he was shot at close range by a 41 year old former Maritime Self-Defense Force member by the name of Tetsuya Yamagami using a handmade weapon. His motive was personal rather than political. His mother apparently became involved with the Korean Unification Church cult and went bankrupt giving it donations, and Yamagami believes that Abe was involved with that church. The church has confirmed that his mother was a member and did go bankrupt, though they deny forcing her to make donations.

The shock is widespread for many reasons. Gun violence itself is exceedingly rare in Japan. Assassinations of leaders is even rarer. The last prime minister or former prime minister to be assassinated was before World War II.

Like I said, I don’t have anything to add to the facts of the event. But I do have a personal recollection involving security for Prime Ministers here.

I was leaving a hospital in Shinjuku after visiting a friend and Hashimoto was coming into the hospital to visit his mother. As I walked out the door he came in the same door and we banged into each other. We both said excuse me and that was that.

Outside the front door I saw there was a very sparse security detail. Maybe two official-looking cars, and a couple of official-looking people on walkie-talkies. Nobody approached me after the incident. That was all there was to it.

I was just really surprised about how little security there was for a sitting Prime Minister.

And of course the topic of Abe’s security arrangements are a big part of the current news.