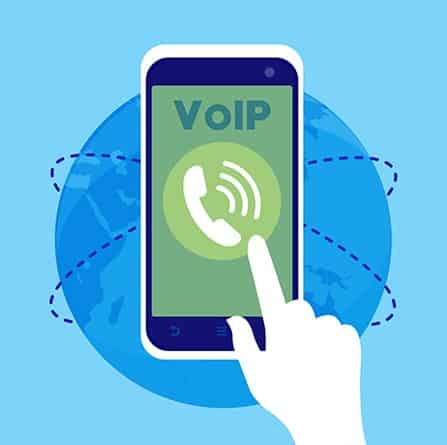 Please be sure to see the updates section at the end of this article. Last updated June 9, 2021.

VoIP (Voice over IP) services let you make and receive phone calls and send and receive text messages over devices connected to the Internet, even without a cellular connection.

These services are of great use for people, like me, who live overseas. VoIP enables you to have a U.S. phone number, make and receive calls with that number, and send and receive texts, almost like you had a cell phone in the U.S.

Even for people living in the U.S it could be useful in various situations.

Calling over wi-fi – While most people probably have unlimited talk and text contracts, some don’t. In that case, having a way to make phone calls just over wi-fi can be useful.

Burner phone numbers – This isn’t something I see doing, but some people might want to use an extra VoIP number as a “burner” phone. For example, you might want to use a phone number when using Craigslist ads, and then not have to worry about receiving calls or texts after your transaction is done. Or with dating apps.

For non-domestic travel – When traveling overseas (if you do that again) a VoIP number also comes in handy by making use of local cellular and wi-fi connections to make calls.

If you can’t use your phone – Also, if your actual phone breaks and you need to make calls on an iPad, for example, (which happened with my sister the other day when her iPhone broke) it could give you a vital means of making and receiving phone calls.

Extra features – In addition, some of these services have extra features, such as creating transcriptions of voice messages. That might be more convenient than the standard voicemail on your actual phone.

Note that some verifications might still not work depending if the service checks to see if your number is VoIP and have a policy against sending text to those accounts.

There are also cautions about not being able to make emergency phone calls with such services, though I’ve never tried it.

Google Voice is a popular service I have not tried. I have not described it here because I have never been able to set it up. Perhaps because I live overseas. And you must have a working U.S. cell phone for messages to get forwarded to, so it is less useful than the other apps mentioned here in that regard.

These are the ones I’ve actually used:

Skype-in Number (a feature of Skype, owned by Microsoft)

Note: Pinger and TextFree are functionally basically the same, and you have the same credentials and text/call records. See https://pinger.zendesk.com/hc/en-us/articles/360037475111-What-s-the-difference-between-the-Pinger-app-and-TextFree-app- for info on their history. I had been using TextFree but switched to Pinger today just because it sounds nicer. All my messages and voicemails were still there.

Note: Pinger is more difficult to use on the iPad than either Skype or Talkatone because the dialer only displays in portrait mode. If you have your iPad connected to keyboard, in landscape mode, then the dialer appears sideways. Pinger support has told me they have no plans to fix that problem. Apparently they used to have an iPad-only app, but gave that up, so Pinger on the iPad is technically no longer supported.

I discovered this one when trying to help my sister, whose iPhone broke. It has advantages if your main goal is simply having a free number that works over wi-fi to make and receive calls. However Pinger starts you off with 60 free minutes, so in an emergency that will work as well.

Pinger (Text Free) vs Talkatone – which is better? It depends.

Pinger’s full-feature Pro pricing at $4.99/month is a bit better than Talkatone if you want to be ad-free, because Talkatone’s subscriptions are separate, not inclusive. For example, if you subscribe to Talkatone’s “Plus” level at $3.99/month you still see ads unless you also subscribe to their separate ad-free level for another $1.99/month. We’re talking about a difference of $0.99/month for all the features.

However, even with Talkatone’s low-cost ad-free subscription you still get unlimited calling and also ID verification from short-codes.

With both Pinger’s Pro at $4.99/month and Talkatone’s Plus at $3.99/month your number is reserved for you and won’t disappear. Without those subscriptions you need to be sure to use the service at least once every 30 days to avoid losing your number.

With Pinger’s Pro plan you get unlimited calling to the U.S., Canada and a few other countries, no ads, short code and ID verification support, outgoing text to short numbers, nice quality voicemail, voicemail transcriptions, and a phone burner feature. Customer support is very slow to respond though. With Talkatone’s Plus plan it’s similar, though the free calls are limited to the U.S. and Canada and the phone burner feature isn’t free.

Both Pinger and Talkatone’s ID verification from short-codes work (banks, credit cards, the IRS), however only Pinger lets you text to short-codes. Talkatone does not support that.

I renewed my Skype-in subscriptions this year again but may make a transition to just Talkatone or Pinger after that because of the shortcode and ID verification support, customizable voicemail, and voicemail transcriptions.

If ID verification and short numbers is not a concern, then even without a paid subscription, Talkatone does give you free outgoing calls, so there is that to keep in mind if you want a service with completely free calling, don’t mind the ads, don’t need short number or ID verification, and don’t need voicemail transcriptions.

Both Pinger and Talkatone support ID verification from short-codes with a paid subscription. Pinger/Textfree is $4.99/month. I have subscribed to Pinger and tested with one of my U.S. credit card companies that couldn’t send to my Skype-in number and it worked. PayPal, IRS and other major sites are supported as well.

Talkatone, with a subscription (even the lowest cost Premium $1.99/month ad-free subscription) also supports short numbers and ID verification. It worked with my banks, credit cards, and the IRS. However, unlike Pinger, you cannot send a text message to a short number. If that is important to you then Pinger is the better choice.

And if a full computer desktop app for making calls is needed, having a Skype-in number and calling subscription might be worth it. If you also have Office 365 you might as well take advantage of the international calling minutes if you need them.

Voice quality is much better with Talkatone when on speaker or using earbuds. With Pinger it’s basically impossible to use that way. I hope Pinger fixes that problem – I’ve been back and forth with them multiple times about it. If voice calls are important to you, and you would like to make them hands-free, then Talkatone is really your only choice between the two.

I’ve been having some trouble with Pinger lately. In particular, people on the other end can barely hear me if I’m using my earplugs or speaker. This does not happen with my regular cell phone service or with Talkatone. Pinger has verified this as a bug and is looking at it.

Pinger also doesn’t work well on an iPad in a keyboard case because they gave up on their iPad app and it only works in portrait mode. Talkatone doesn’t have this problem.

On the other hand, Talkatone’s plans are very difficult to figure out (which include verification codes and short number support, for example?) and their support is very hard to reach.

I’m also testing TextNow, which seems to have all the features, but is twice as expensive as the others if you want the very important support (for me) verification codes and short number support.

Support is basically very slow to respond for both Pinger and Talkatone.

The advantages of Talkatone is that (1) the sound volume is much better (like a different world better) than Pinger/Text Free when using earplugs or on speaker phone. Pinger is basically unusable that way, but that’s the way you normally would use your phone if you need hands free or are outside. Talktatone sounds loud enough and clear with either earplugs or on speakerphone. I tested this with three different people so far, and it’s 100% reproducible.

Reason (2) is Pinger dropped their iPad support so you need to use the iPhone app in portrait mode only on the iPad, which is awkward if you are using the keyboard case. Talkatone has a proper iPad app. Also, notifications seem to be more obvious and work better with Talkatone.

Currently I’m subscribed to both Pinger and Talkatone, but may drop my paid Pinger subscription because of these usability issues.

I still have my Pinger subscription, but may drop it because of usability issues described above. I’m mainly using Talkatone, and I have a subscription (the ad free $1.99/month plan) which means I can receive ID verifications from short-codes, including my banks, credit cards, and the IRS.

I wonder how important do think text messages to short-codes are as long as you can reliably receive verification codes, which I can? I’ve never had to in the past, though Pinger is able to do that.