While I was at Yodobashi Camera today I got a Thunderbolt to Gigabit ethernet adapter for my MacBook Pro. I figure, since I’m paying for the high speed fiber optic (Sony Nuro), why limit my self to wi-fi speeds at home? The LAN adapter is just $24.

The screenshots show the before (over wi-fi) and after (direct LAN connection) speeds.

After connecting the adapter and making a direct LAN connection to the router, the speed is 783.2 Mbps down and 940.1 Mbps up. 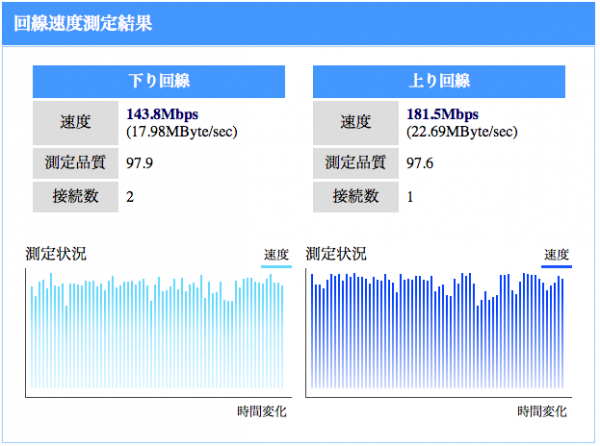 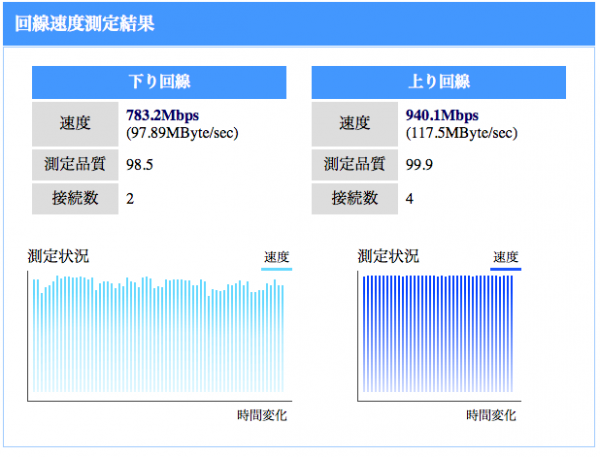 I feel a bit nostalgic after all these years as an NTT Flets fiber optic customer, but I’m a sucker for persistent salespeople (please don’t give out my address!) and I checked this out and it does seem like a good deal.

There is a campaign going on for the new Nuro fiber optic network by Sony. The salesman claimed that Nuro actual throughput speeds are 20 to 30 times faster than NTT. The maximum download speed for the new fiber optic line is 2 Gbps and upload is 1 Gbps. He said the actual throughput I could expect is typically 800-900 Mbps, which would indeed be much faster than I have now. Of course that would be further limited by my wi-fi maximum bandwidth, but still, in real practice it could be even faster than what I have now, by a lot.

At the same time, I’ll switch one of my two analog land lines from NTT to the Nuro optical phone network, reducing that cost as well.

With the new system I have to switch my provider from Asahi-net to So-net, but there is no provider charge, the phone line drops by 2/3rd and the fiber optic line cost is also cheaper, so the total for everything will be 5,505 yen/month. That’s a savings of about 2,600 yen per month. Not unsubstantial.

Plus as additional incentives, the first two months are free. And it includes a new wi-fi router with a maximum 450 Mbps speed to replace my old Apple wi-fi router, which I believe only has a maximum speed of 100 Mbps (it’s the old type). And they set it all up for me. Also, after 3 months they deposit a “cash back” of 20,000 yen in my bank account.

On the downside, there will be a 2,100 yen NTT fee for switching my analog phone number over to Nuro, an 840 yen contract fee and the way the setup/construction fee works is that it technically costs 31,500 yen which they divide over 30 months to 1,050 yen/month. Then they deduct the 1,050 yen/month so long as I keep the service. So it becomes free, unless I quit before 30 months, in which case I owe the unsubsidized difference. It’s a typical Japanese contract pattern.

Also, it’s a two year contract. After two years there is a free “window” in which you can quit with no fee, but if I quit outside the window there’s a 9,800 yen early termination fee. That’s also a pretty typical Japanese contract pattern which cell phone providers use. I don’t particularly like that system, but I agreed to it in this case.

I figure the 20,000 yen “cash back” after 3 months, plus the first two months free service, will more than cover the minor initial expenses. And having the newer, higher-speed wi-fi router is something I’ve been wanting to do.

Anyway, I’ve been sucked in. I’ll let you know how it goes.