I made it back. Fortunately 90% of the route was a straight line. 🙂

The turn-by instructions weren’t completely unhelpful. And the fact that I had to go over a river and under a train tracks provided some visual landmarks.

Mostly I just looked for distinctive sharp corners and tried to keep the blue ball on the line.

But what a power drainer!

As for Chako, she’s resting quietly, but looks pretty forlorn in her Elizabethan collar. Also, the hospital apologized because even though they weren’t supposed to clip her ear (an indication that a stray cat has been spayed) they accidentally did it anyway. So there is a little triangular part missing from one of her ears. Oh well, at least people in general will know she won’t be birthing all over the place.

She gets out in about a week. 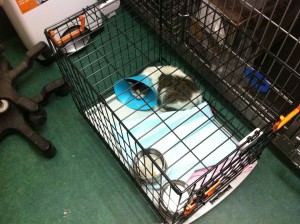 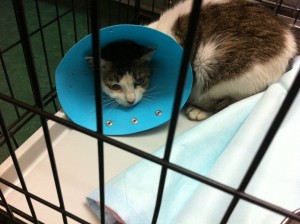