Both Laura Bush and Cindy McCain apparently disagree with Sarah Palin on abortion in two respects:

1. They both disagree with her position on banning abortion even cases of rape and incest. John McCain and George Bush disagree with Palin on that too.

2. They both disagree with overturning Roe v Wade (even though both their husbands, and Sarah Palin, are in favor of that).

It seems that both Laura Bush and Cindy McCain, even though they say they are in the “pro life” camp, when it comes down to specifics are actually in the “pro choice” camp.

While Sarah Palin is off in an extremist anti-abortion world of her own.

As far as Obama goes, he’s off in a world of his own too, in the other direction. He blocked the Illinois version of the BAIPA (Born-Alive Infants Protection Act), which would protect babies who are unintentionally born alive after a failed abortion. The issue is that such infants were being “shelved” – ignored until they died after being born. As stated in a “Jerusalem Post” editorial, “Obama’s position essentially boils down to this: a woman who contracts for an abortion is entitled, one way or another, to a dead baby.”

Abortion is really an intractable issue. If you believe that human life begins at conception, it follows that abortion is infanticide and it is natural that you would want to prevent that. I can understand that if you believe that infanticide is taking place that it is too simple to argue that you, as a pro-lifer, are trying to force your moral views on others. It is more a case that you believe that something really morally, intolerably wrong is going on that affects another human being. That would be something that goes beyond personal privacy, or issues involving adults engaging in mutually consensual behavior. It would be more like abolitionists who fought against slavery.

If you believe that human life doesn’t begin at conception then you are more likely to take a so-called “pro-choice” view.

Religions don’t all agree on when human life begins. Some say at conception, some say “when the soul is invested” (some say at 40 days, some say later). Some people say when the fetus becomes “viable”. I believe even the Christian church has evolved different positions on this over the centuries, but I’m not a religious historian.

My conclusion? I said it is an intractable problem, so I don’t have an answer. I think it is more complicated than the slogans that both sides want you to believe. Thus we see Laura Bush and Cindy McCain straddling the fence, both claiming to be “pro life” while they are really “pro choice”.

I wish I understand Obama’s position more though. I am not able to follow the morality or humanity or logic in his line of thinking on the issue.

The GOP in all it’s diversity – this photo from page one of today’s New York Times. 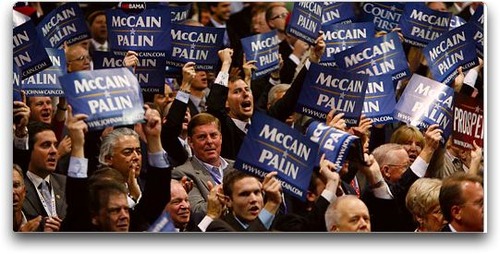 Read this entry on the Alaska Independence Party, which has promoted the succession of Alaska from the U.S. Note the entry on Sarah Palin, who apparently used to be a member.

A little “iffy” in the post-civil-war era for a vice-presidential candidate, I would think…

Forget “Babygate”. It’s bogus and a distraction. I also think getting into a debate about Palin’s experience is a minefield that could backfire on the Obama campaign, because truth be told Palin’s experience compares well with Obama’s, and he is at the head of the ticket.

However, one relevant fallout from the whole episode is a very reasonable question to ask Governor Palin in a debate, or any upcoming interview:

“Governor – you have expressed opposition to sex education in schools and have promoted an ‘abstinence only’ policy to avoid unwanted teen pregnancies. Do you still feel such a policy is wise and effective?”