I really like this refrigerator. I bought it in the spring of 1988. I had just moved into a large apartment provided for me by Fujitsu. I needed a new, larger refrigerator, and so I sprang for this Fujitsu General model. I still remember shopping for it in Akihabara.

Since then, it’s come along with me on two moves, to two new houses. A constant in the midst of change.

I can’t believe my eyes are actually growing misty at the thought of my refrigerator’s impending demise.

But, after more than 25 years, it seems to be coming to an end.

Maybe it’s the memories of everything that has happened the last 25 years. After all, I was 32 years old when I bought it, and now I’m 57. A generation ago.

I still remember the day it came home. I was so excited. And I remember all the dinners and parties it served over the years.

Even though I never named it, I somehow feel like it’s always had some sort of a personality. A friend always there in the middle of the night. Is that foolish?

It still chills everything just fine, but it’s been growing noisier and noisier by the day. Finally today I called Fujitsu General, and we listened to the sound together. It goes silent when the doors are open, but as soon as you close the freezer or refrigerator door, the large motor sound starts up again.

The tech person confirmed that it’s the fan motor. And, not surprisingly, there no longer exist replacement parts for it.

But maybe it is time. 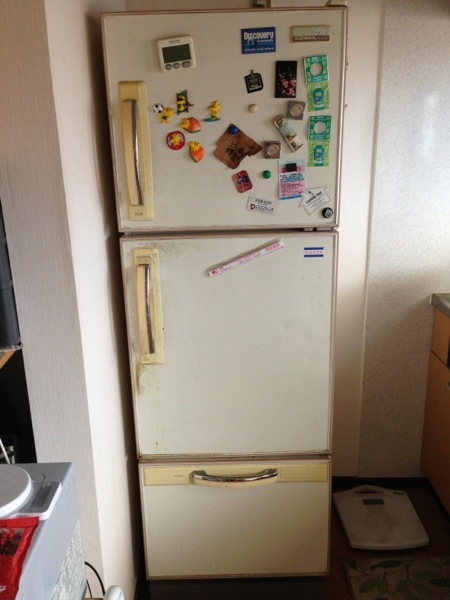