As I mentioned yesterday, when I got home Mon-chan seemed a bit better. She had more energy, and was hopping from perch to perch. It could just be that she is getting old and has developed arthritis. I wanted to clarify a few points, because from comments I received there to be some misunderstandings, and I also just to explain a bit more what’s happening.

First, this isn’t sudden. Her leg has been getting worse over a period of months. I first noticed it starting to happen about 4 months ago. I did take her to her usual vet when she had her nails trimmed, and he examined her as best he could and said to just wait and see.

The problem with vets here is that none of them in my area really seem to be very knowledgeable about bird illnesses. When Hao got sick back in 2012, and ended up passing away, I spent every day taking him by taxi almost every day to every possible “bird vet” within reachable distance, and nobody was able to do anything better than identify that he had a blood circulation problem and recommend more green vegetables.

Mon’s left leg is not discolored, it’s not swollen and she’s not picking on it. It’s hard to tell if she is in pain or not. She isn’t making any strange sounds, and doesn’t mind being held, and she is eating normally. But she also doesn’t look that comfortable when trying to find a relaxing position to sit. And she is trying to keep weight off the leg – though from time to time she uses it when absolutely necessary.

Here are some photos from this morning. Plus a video at the bottom. The video is about 6 minutes long, but if you are interested, take a look at it. It shows me handling her, putting her in and taking her out of the cage, and some hopping from perch to perch. You can see the lameness in her leg, and how she has trouble grappling to keep balance sometimes.

First, here is a cute closeup of Mon-chan this morning. One thing that has changed is that suddenly she doesn’t seem scared of my iPhone, and lets me take her picture close up. On the one hand I think that’s a good thing. On the other hand, I worry she is just allowing it because she is weaker and doesn’t have the strength to flee from the iPhone (she really does hate the iPhone, I think). In the photo you can see she is favoring her right leg, and keeping weight off her left leg. 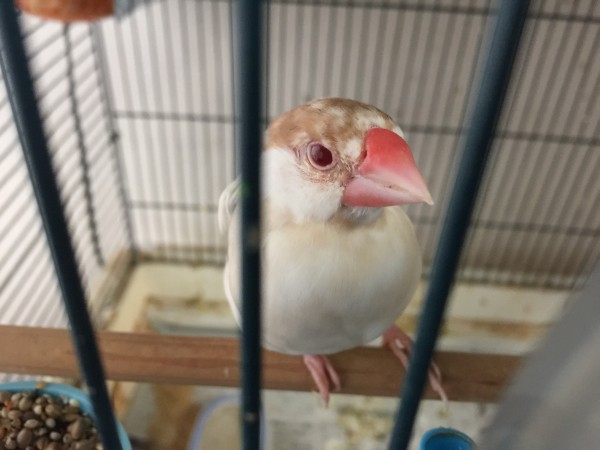 Yesterday somebody suggested adding a flat perch, in case Mon finds it easier to sit on. I happened to have this one, from when Hao got sick and he took to sitting atop the pet headers or on the floor. But he never used it, and so far Mon hasn’t used it either. But it’s just been in there a few hours. 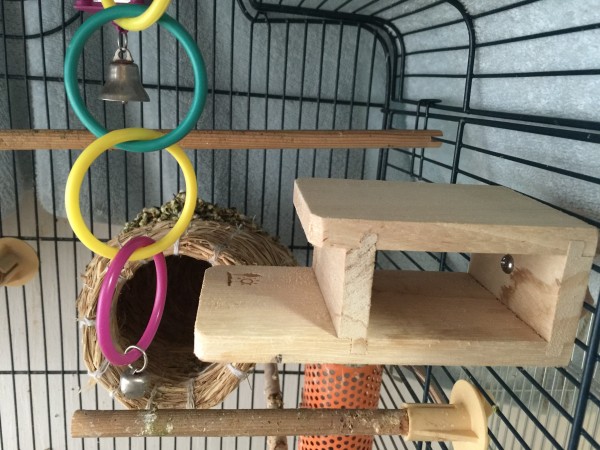 Here are a couple of cute photos (I guess all Mon’s photos are cute) taken from the video (which is at the bottom) showing her resting on my hand this morning. In the photos it’s hard to tell, but she is also avoiding as much pressure as possible on her left foot. 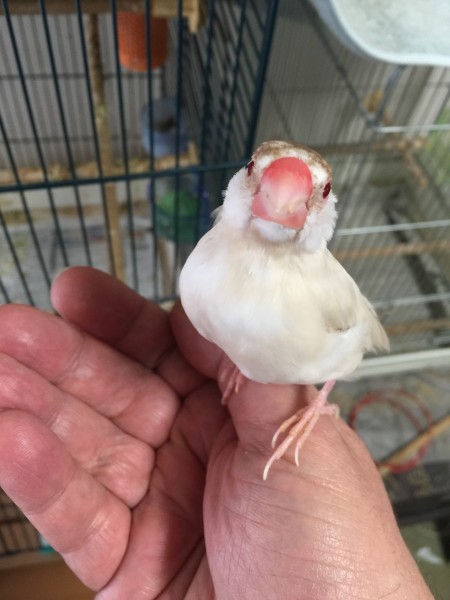 Finally, here is a 6 minute video. It’s not exciting, but you can see me handling Mon, taking her out of the cage, putting her back in, etc., so you can get a better idea of how she is, and you can see the lameness in her left leg in action. I suppose one thing that is reassuring is that she in know way is shirking away from being handled. I expect an animal in pain would definitely not want to be handled. So I think she is not in pain.