My favorite physics professor from undergraduate school at the University of North Carolina at Charlotte (UNCC) sent me this photo today, and I had to share it with my friends. The photo was found by the wife of another physics professor in the department, who passed away some years ago.

My first reaction when seeing the photo was, “Oh. I’m not in the picture.” Then I looked again. Was that really me?! I can’t believe it!

I really loved my days at UNCC (at least from my vantage point in 2015). And for a couple of years I was even president of the Physics Club and we did things like set up a tent of physics demonstrations in the park during festivals (“Physics in the Park”), and we would go on trips together to American Physical Society conferences each year.

I’m going to list the names of the people in the caption so they will show up in search engines. In addition to me, the photo shows John Osborne, Dr. Victor Pollak (whose wife found the photo), John Ashburn, Rodney Jones, Tom Crawford, Dr. Robert Vermillion, Loran Serwin, Dr. Bill Melton, Robert Fulbright, Tommy Jolly, Ted Minor, Dr. Ed Oberhofer, Dr. Mike Corwin. Not in the photo, but their whereabouts are mentioned are Cindy Pope, Buddy Ritchie (he came out to visit me in Japan once), Cathy Lerner (my sister), Dr. Terrill Mayes (the caption says he was playing ball – a euphemism?), Dr. John Lipham, and Pat Arrington.

So many memories are flooding in at the moment…

You can click on the image and see it larger.

Thanks very much, Dr. Melton! 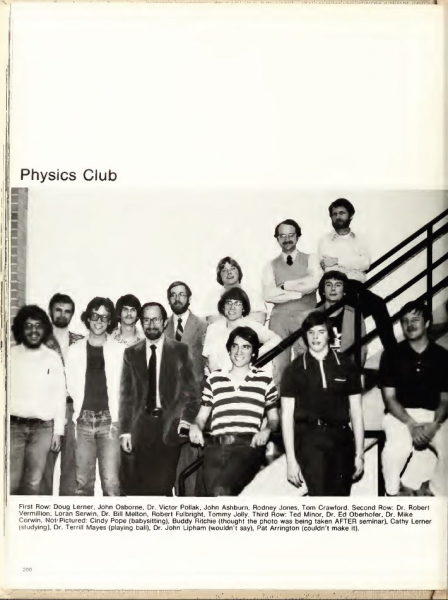