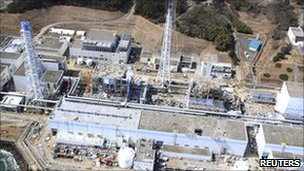 Japan’s crippled Fukushima nuclear plant is not fully prepared for heavy rain and winds of a typhoon heading towards the country, officials admit.

Tokyo Electric Power (Tepco), which runs the plant, said some reactor buildings were uncovered, prompting fears the storm may carry radioactive material into the air and sea.

Typhoon Songda is expected to hit Japan as early as Monday.

Fukushima was heavily damaged by the deadly 11 March quake and tsunami.

“We have made utmost efforts, but we have not completed covering the damaged reactor buildings,” a Tepco official said on Saturday.

“We apologise for the lack of significant measures against wind and rain,” the official added.

Tepco has been pouring anti-scattering agents – such as synthetic resins – around the damaged buildings of reactors one and four.

But some of the buildings still remain uncovered after they were damaged by hydrogen explosions soon after the quake and tsunami struck.

A special adviser to Prime Minister Naoto Kan criticised Tepco, saying that the current safety measures “cannot be said to be appropriate”.

Typhoon Songda – with winds up to 216km/h (134mph) – was moving north-east and could hit Japan on Monday, the Japan Meteorological Agency said.

Tepco and Japan’s government have faced widespread criticism – both at home and abroad – over their handling of the Fukushima crisis.