Sad news to report about Chako

My neighbor, who had continued to feed Chako every day in secret from her husband, behind her house, said that after the huge 45 year record snowstorm last week, Chako has not yet returned. We strongly suspect she was unable to survive the snowstorm.

Sort of a lonely feeling that if she passed away she had to go like that. But if so, she did live the normal lifespan of a feral cat. Even though feral, she seemed sweet and quiet. We tried our best with trap, spay and release. But she could not get used to people, except for me occasionally “nose-bumping” her.

Purple did return after the snowstorm, and my neighbor continues to feed him.

Some old blog posts and pictures of Chako can be found here: http://lerner.net/tag/chako/

I might have gone into a panic over nothing regarding my diet. Since yesterday, in one day, my weight dropped 2.2 kg = almost 5 lb. Obviously there must have been some water retention.

Nevertheless, I think all the high-glycemic foods I’ve been eating (white rice, senbei, corn-on-the-cob) has altered my hunger cycles. Plus rice has a large number of calories. So I’m going to stop eating rice every day and make a couple of minor, non-vegan, changes to my diet.

For example, I ate low-fat cottage cheese yesterday for the first time in 2 years. A container has only 224 calories, but a whopping 34 g of protein, and is very low fat, and very filling. Non-fat dairy is actually allowed on the Ornish program, so I don’t feel this is too far off.

I decided not to add chicken, but I did add some small amounts of fish (sashimi) yesterday and today. That is also very low calorie and filling. I don’t think I’ll wreck my heart trying this for a couple of months. My dietician and doctors all recommended it in fact.

In early April I have my next checkup. If my cholesterol goes up I’ll rethink. Otherwise I might continue to allow small amounts of dairy and fish as part of my diet to help control appetite and keep calories low. Everybody is different. We all have to find our best way.

I like the iPad 4 I recently received (thanks again, Dave!) so much I’m thinking of selling it.

Sound contradictory? It makes sense to me, and I think it’s not just “gadget cravings” for the iPad Air.

The iPad 4 is such a huge improvement over my old iPad 2 in visual quality, speed and very importantly in the fact it has Siri, that I find myself grabbing for it even more than my Nexus 7 now. I really enjoy using it, even though it is heavier than my iPad 2.

Since I’ll be making a trip to the U.S. next month, it seems to me an iPad Air with cellular might be a perfect thing to take along. I can get a no commitment one-month contract with tethering in the U.S. and stay connected with all my devices from everywhere, and not bother with renting a mobile wi-fi, or separate phone, etc. The iPad Air would become my mobile hot-spot.

It seems it would be a perfect, utilitarian, light-weight carry along. And in Japan I can use a sharing data contract with my iPhone 5, so it will only be an extra 1,300 yen a month in running costs.

So I think I’ll sell my iPad 4 – and older iPad 2 – and even older iPad 1. I don’t know the combined values, but I think together they will go a long way to covering the cost of the iPad Air. So it seems worth doing.

And that’s my update for today.

I installed an app for an Android forums site. When I clicked on a link in an email I received, I was presented with this choice of how I wanted that link opened. It knew the app was installed, and it gave me a chance to visit the site with that app, or open it with my default Chrome browser. And it also let me decide whether to do that once or to have that as the default action.
END_OF_DOCUMENT_TOKEN_TO_BE_REPLACED

Well, I wasted more time just now listening to the same track over and over again on my Nexus 7 and my iPhone 5, and even on my iPad 2: Linda Ronstadt’s “Sentimental Reasons”. She has a good, clear voice and a good range, so it’s easy to tell “which is best” – or so I thought. I’ve also been having a side-conversation with Chris, the developer of iSyncr and RocketPlayer for the Nexus 7, and have been testing RocketPlayer’s quality on the Nexus 7 as well.

Side-note: I feel sort of dumb spending so much time on this since (1) I am by no means an audiophile or music expert and (2) listening to music on any of my devices is not something I spend that much time doing. Usually I listen on my iMac at the end of the day, while relaxing with my java sparrows. Nevertheless…

Anyway, it’s just not clear to me anymore (no pun intended). I listened via the Google Play Music version that gets “pinned” on my Nexus 7 (wherever that file is – I have no idea, so can’t check the file size or bitrate info), RocketPlayer (the 256 bitrate AAC file I transferred directly to the Nexus with Android File Transfer) and on my iPhone 5 and iPad 2, via the standard iOS Music app.

It’s not obvious to me whether Google’s Play Music or RocketPlayer sounds best in this case on the Nexus 7. But I swear the sound is “clearer” and the dynamic range (the highs and lows of pitch) is “greater” coming out of the iPhone 5 speakers than the Nexus 7 speakers.

I went back and forth a dozen times at the same point in the song, and when I switch back to the iPhone 5 Ronstadt’s voice comes through clear as a bell, while it just doesn’t seem as clear, or full of dynamic range when it comes out of the Nexus 7 speakers, in either app. It’s maybe subjective, but if I had to choose one of the speakers I’d say the iPhone 5 sounds better between the two.

Meanwhile the iPad 2 blows them both away in quality. I honestly don’t see how anybody can say the Nexus 7 speakers sound better than the iPad 2’s speaker. There’s just no comparison, in my opinion.

Yet between the Nexus 7 and the iPhone 5, I’m no longer sure which is technically “better”. While the sound is undeniably “clearer” on the iPhone 5, I’m no longer sure the “quality is better.” The more I listen, the more I hear intangible defects in the speaker I wasn’t noticing before, such as “tinniness” problem I was complaining about on the Nexus 7.

I suspect that the iPhone 5 is maybe “covering up” the defect for novices like me with a larger volume and throwing in more bass, or something like that, by default.  But the iPad 2 is clearly better overall than either the Nexus 7 or the iPhone 5.

Still, if you’re not doing side-by-side comparisons like I was, probably any of the speakers will suffice for casual listening.

For getting the bottom of which speaker is actually better, it might be best to compare the same YouTube video of music on both devices using the Google YouTube player. Not sure anymore.

My new Nexus 7 arrived today. And… wow. I have to say I’m impressed. Everything worked out of the box. The screen is amazingly beautiful. The voice feature works at least as well as Siri. The Swype keyboard is amazing. And it even knows where I am with more detail than my iPhone 5. Gmail on the Nexus is also really beautiful. I haven’t tried that much yet, but am really impressed so far. And no dead pixels. 🙂

This is a screenshot after I asked it by voice what the weather is like today. 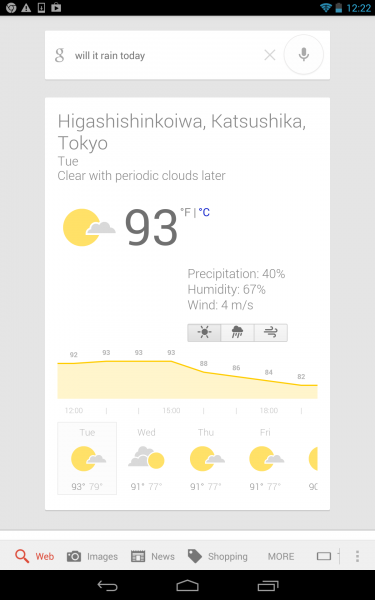