↓
Home Menu ↓
For Android app testing, I purchased a new DoCoMo LG Optimus Bright L-07C from Yahoo Auctions. It arrived this morning, New Year’s Day and I’ve been playing with it.
Just released in June, the specs are fairly good I think for the time (Android 2.3, 5 megapixel camera, 4″ 480 x 800 screen, all the usual GPS, etc., sensors and so on). Of course Japanese models turn over quickly and people want one-seg TV and keitai wallets, so they are selling brand new at auction sites at low prices now. Typically the auctions have a “buy now” price of about 12,000 yen, and the auction prices bid near that. Mine had a “buy now” price of 13,000 yen ($162.50) including shipping, and when the price rose to 12,000 yen I just snapped it up. Some of the auctions don’t include shipping. And some of the Optimus Brights being sold did not include all the standard included accessories, such as the microSDHC card. But this one included everything.
The review on this model are “so-do” because specs are changing so quickly. But it seemed more than sufficient for my testing work. I wasn’t expecting much, but was very pleasantly surprised.
Here are some photos:
(1) The box it came in. This is the box wrapper. 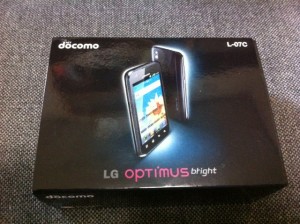 (2) The inner box, after removing the box wrapper. 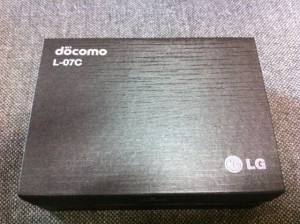 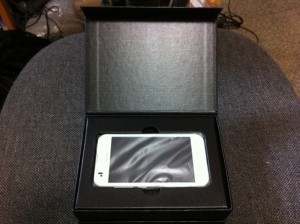 (4) First impressions: it is very light and thin! It weighs noticeably less than my iPhone 4 and is thinner than the iPhone 4. It also has a larger screen: 4″. 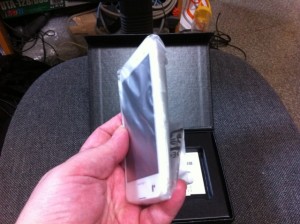 (5) Lifting up the tab the owner’s manual is just below it. 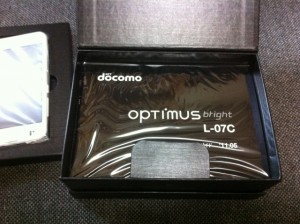 (6) It comes with three back covers, depending on your mood. I am in a “white cover mood” today. 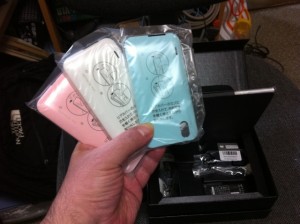 (7) The USB data cable connects to the power adapter or directly to a USB port on your computer. I still haven’t investigated what all can be done when mounted directly with the USB cable. 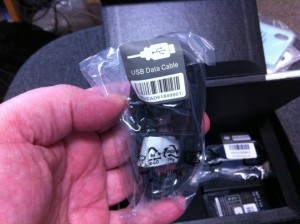 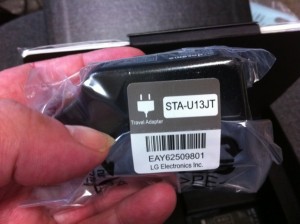 (9) The replaceable battery back. This is also very thin and light. 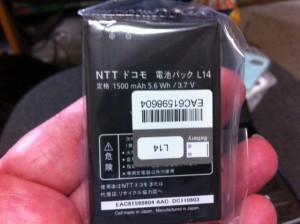 (10) The LG Optimus Bright comes standard with a 4 GB microSDHC card. It even says so in the manual. So if you are looking for one online, make sure it includes this. Some sellers are not including it. One tried to tell me, “It doesn’t come with one, but I’ll include a 2 GB one for you.” So do be careful. This is supposed to be standard. 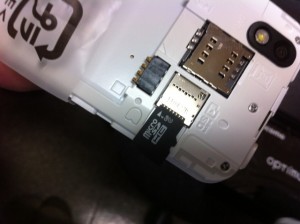 (11) It immediately turned on. First impressions: The screen is very large, easy to read and bright.  And I am still amazed by how light it is, even with the battery installed. (Note: I didn’t realize when taking all these photos that the protective film was still on the screen.) The screen itself is actually very sharp, which doesn’t necessarily show up well in these photos taken with my iPhone 4. 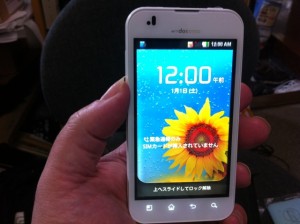 (12) The first screen that pops up lets you choose your language. I chose English. 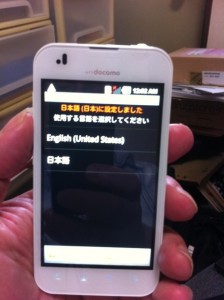 (13) The setup is really easy. It takes you screen-by-screen through the most obviously needed settings. The next screen was the wi-fi setup, and I connected to my home wi-fi. 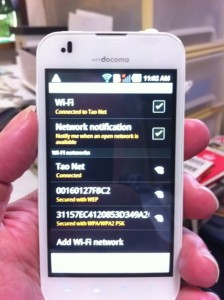 (14) Next you are given a chance to add a Google account. By the by, I later changed to a QWERTY keyboard. 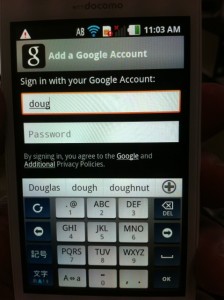 (15) The next slide gives some UI advice – then you are ready to go! 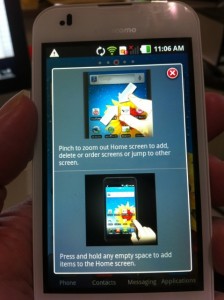 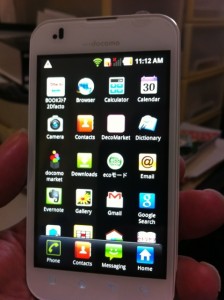 (17) This was interesting. Some of my photos were already in the Gallery. I guess it syncs what it can from the Google account I signed in with. 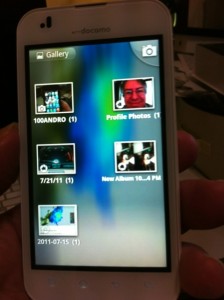 (18) Similarly, my contacts automatically appeared. I guess anything that ran through Gmail. Scary! Clicking on a contact let me send email. 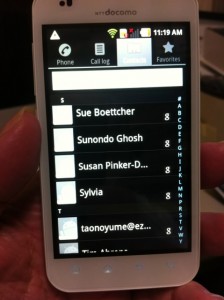 (19) I connected the USB cable to charge. It “pinged” at me when it was done and recommended unplugging it to save energy. 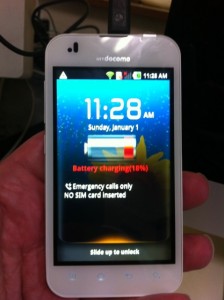 (20) This compares the screen open to the same Evernote note on my iPhone 4. The Optimus is brighter and larger. The iPhone 4 has a higher resolution, so shows more info without sliding. I do have to say the Optimus Bright is very easy to read. 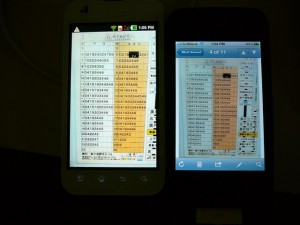 (21) Other notes:
– You can’t see it well here, but the LG Optimus Bright includes four “buttons” on the bottom: (1) a context-sensitive menu, (2) home, (3) go back , (4) search. I took a little movie I’ll put up. These are fixed “buttons” but are flat. There are no moving parts there. There is a proximity sensor so when you put your hand close it temporarily backlights the buttons a bit.
– I have another movie showing the nice effect when it switches between landscape and portrait mode.
– There is a little “G” (gesture) button on the side. If you hold it down, you can perform certain gestures without actually touching the phone. For example, if you tilt the phone left, the screens slide left and so on. Sort of interesting.
– I haven’t tried all the apps yet, but did try maps. It lets you do a rotate gesture with two fingers in addition to pinch in and out, which is very cool. The iPhone version doesn’t have that feature.
Anyway, I am pleased. I wasn’t expecting much at all yet it seems like a great bargain for a no-contract phone. Web pages load quickly, mail works, the camera works fine. I’ll upload more later on.
(I wonder if I can unlock this and use it on travel in the U.S. since I can’t unlock my iPhone).
doug