Just relaxing on a rainy evening. 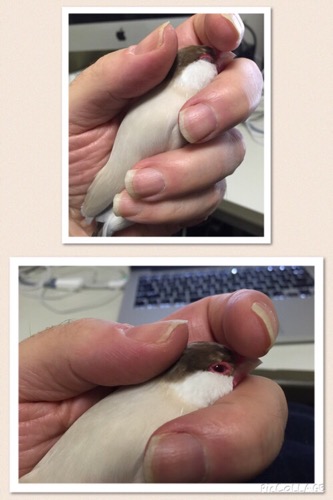 It’s been a long day so far.

Hao just didn’t seem “normal” to me (his constant sleeping, his lack of interest, even his lack of aggression if you tried to pet him) so I took him to a more distant animal clinic in Kanamachi, which has doctors who know more about treating birds than my local doctor.

Anyway, it seemed to me that he was ill. And it was very apparent to the doctor after a checkup.

The problem is that his body is not creating enough blood. This is obvious if you look at older photos of him compared to now, but I didn’t notice the change since I see him all the time.

For white Java Sparrows, the ring around his eyes should be bright red, like in this photo of Hao from a year or so ago: 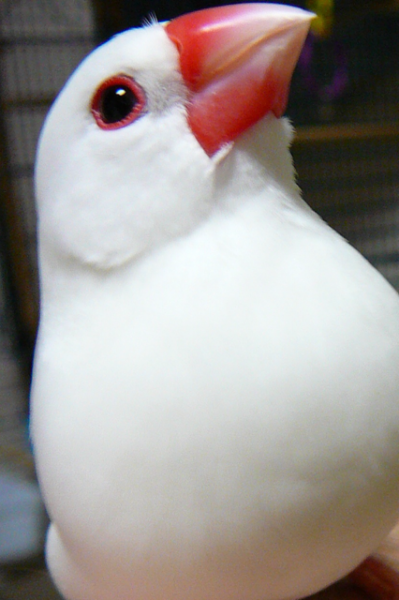 That red is normal and healthy and the color comes from his blood.

Compare that with this more recent photo, from the last couple of weeks: 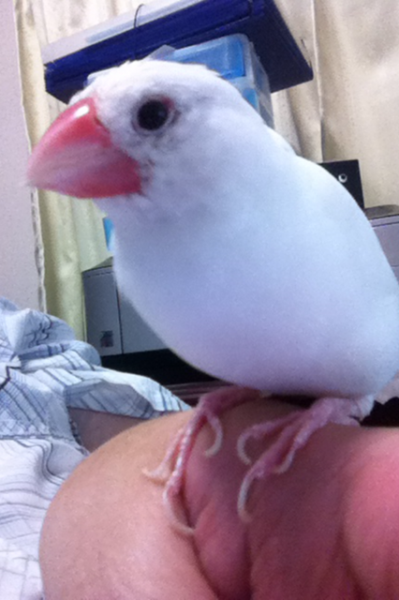 Notice how the ring around his eyes are white? That is very abnormal.

This apparently has been happening recently, but I didn’t notice because I see him all the time. But if I look back over photos over time, I do see the ring getting lighter and lighter, first to light shades of pink and then becoming white like this. The red in his beak is also not as vivid as it used to be.

This means his body is not creating enough blood, and so naturally he’s tired and conserving strength and sleeping most of the time.

There are two main causes for this, but the doctor says it’s almost for sure liver disease or liver failure. The other possibility is internal bleeding, but he said that usually only happens if there has been an accident, and he did an examination of Hao’s droppings, and found no blood, so he’s almost certain it’s a liver problem.

I got medicine I’m supposed to give him twice a day, but am not confident I can get him to take it. It’s drops, like an eye dropper, and I have to somehow get Hao to open his beak and add a drop in twice a day. I’m just not sure at all if I can do that. Also, he recommended adding chinese cabbage or rape to his diet, which he said can also help improve liver function.

I’m supposed to do this and bring him back in a week and see if the red color is returning to the ring around his eyes, which means it is working. Otherwise, I’m not really sure what they can do if it really is liver failure.

They would have taken an x-ray, but he said Hao was under enough stress for today (which I believe is true – see below). Plus this didn’t seem like anything an x-ray would show anyway (e.g. internal bleeding.)

He does have an appetite, which is one good sign. As soon as I got him back in his regular cage he ate a lot before going back to sleep. So I should be able to get him to eat the chinese cabbage (whatever that is – I never bought it before).

Speaking of getting him back in the cage, after I got home Hao did something he never did before (from stress?), which was fly away and I had to hunt him down in the house and he turned up behind the fax machine cabinet and was too scared to fly out so I had to move a bunch of stuff and furniture until I could reach my hand down there far enough to coax him to jump up a bit and let me get him.

Mon was not helpful either because when I went looking for Hao on the 3rd floor Mon rode my shoulder and then decided to disappear herself. But I found her at the top of a bookcase.

Anyway, all the furniture is back in place, and both birds are in the cage and Hao is sleeping again. I’ll have to try to give him the medicine later.

I need a break too. Plus it was further than I thought so the taxi was expensive. On the map it looks like just 1.5 times my usual bike route, so I thought by car it wouldn’t take much time. But the roads were really crowded (i.e. like in Tokyo) and it took forever. Still, considering what vets charge in the U.S. it was probably less expensive here. Round trip taxi plus vet was around $100. Could have been worse. I’m going to check the map for better routes for next week. Both taxi drivers seemed unsure, and their navigators had them take the larger, major crowded roads

Anyway, time to take a break. I hope the medicine and added vegetables work. And I feel bad about not even noticing the change in eye ring color over time. Especially since it’s so obvious if you are looking for it! Sigh.