While Monta is a very sweet, generally gentle bird, who loves snuggling, he is really selfish and territorial when it comes to the nests.

He just does not want to let Mon-chan into the nests. Even though there are two of them!

When Mon was laying her eggs earlier this month, we had no choice but to put Monta into his original cage during this period. He would insist on taking over the nests and sitting on the eggs, and poor Mon could not get into either of them to lay another more, though she clearly wanted to.

If Mon did manage to get in, he would go into the nest and they would squabble for about 20 seconds before she finally gave up and left the nest. They didn’t actually physically attack each other though.

Now that I’ve determined the latest batch are all infertile I’ve removed them and put Monta back into the same cage.

But he is still very territorial about the nests. Even if he is in one, if Mon decides to go into the other one he doesn’t like it and goes and kicks her out.

Sometimes they both peaceably just sit close to each other on the same landing. And sometimes Monta is happily swinging and Mon is happily just sitting and playing with the mirror or other things.

And curiously, they will eat together from the same food dish without fighting with each other.

And they will both sit right next to each other on my hand when we’re playing.

But as far as Monta is concerned, the nests belong to him. 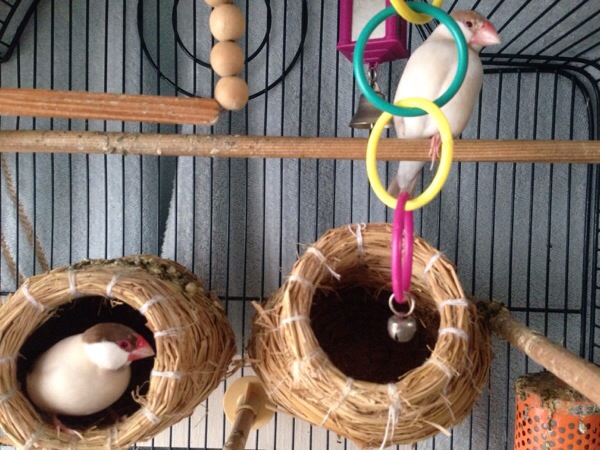 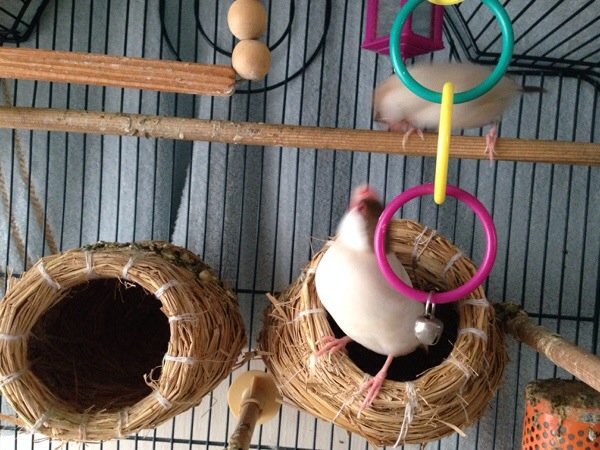