I received this shiny new MacBook Pro retina display 13-inch notebook computer for the classes I’m teaching at Hibikinokai on Sundays. Thanks again, Walt! It was really quite generous. I feel sort of guilty about receiving it, but somehow could not say no. 🙂

Anyway,  the specs of the MacBook are much better than my older iMac, so I decided to use it for my daily work as well. It’s really amazingly fast compared to the iMac. No lag at all, even when running Parallels Desktop. (For Hibikinokai members who might be reading my blog now, I’ll explain that in class.)

But since the display is just 13-inch, I did want a larger monitor for all-day work, so got an extra LG 27-inch IPS LED display to hook to the MacBook’s HDMI port.

Finally I found a bit of extra time, and got things transferred over from my late 2009 21.5″ iMac (left in the first photo) to the new MacBook Pro (foreground in photo) and today hooked up the new 27-inch display (the big screen behind the MacBook). The 2nd photo shows what it looks like when I’m just concentrating on the MacBook Pro and 27-inch display.

You can see from the first photo how much better the whites and brightness of the LG display are compared to the iMac, which I thought was really beautiful until this evening. But now I think the iMac looks dingy compared to both the LG and the MacBook Pro. 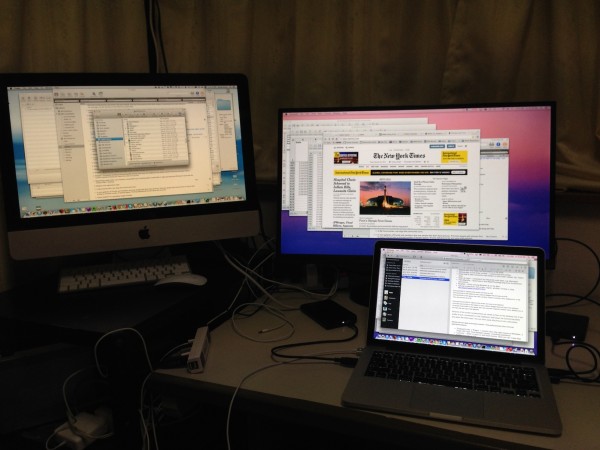 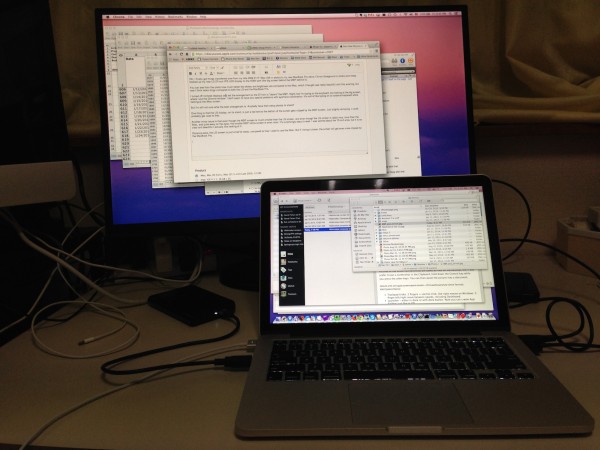 I turned off mirrored displays and set the arrangement so the 27-inch is “above” the MBP. Right now I’m typing on the keyboard, and looking at the big screen, where I put the browser window. I don’t seem to have any special problems with eye/hand coordination. It’s sort of like typing on an external keyboard while looking at the iMac screen.

But I’m still not sure what the best arrangement is.

Really there are no problems. Just a few minor qualms, and I’m curious how other people are doing it.

One quibble is that the LG display, on its stand, is just a tad low, so the bottom of the screen gets clipped by the MacBook screen. Just slightly annoying. I could probably get used to that.

Another minor issue is that even though the MacBook screen is much smaller than the LG screen, and even though the LG screen is really nice – nicer than the iMac – and quite easy on the eyes, the smaller MacBook retina screen is even nicer! It’s surprisingly easy to read. I was worried about the 13-inch size, but it is so clear and beautiful I actually like looking at it. It’s very comfortable on the eyes. So when I glance down at the MacBook Pro I sort of go “ooh, aah” and the LG looks not quite as nice as the smaller retina display (though it looks much better than the iMac). Everything is relative. But I’m looking at this side-by-side now all the time. Until this week I thought the iMac looked great. Well, you know what I mean.

Distance-wise, the LG screen is just a tad far away, compared to how I used to use the iMac. But if I bring it closer, the screen will get even more clipped by the MacBook Pro.

Anyway, no real problems. But I am curious about other people’s setups. Particularly the issue of putting the notebook in front of the large screen and arranging it so the large monitor is “above” the notebook in the settings.

I suppose it’s also possible to rearrange space somehow so I put the larger monitor to one side of the MacBook. I am not sure how “ergonomic” that would be, constantly keeping your head turned off in one direction. I think my neck would hurt after a while. At least this way the screen is in front of me.

I was surprised how easy setting up the external monitor was. It just instantly worked.