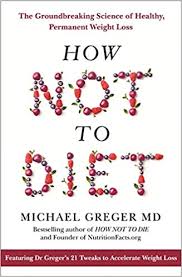 First, let me point out I am a big fan (pun intended) of Dr. Greger, and his first book, “How not to Die”, which inspired me to get back on the whole food plant-based bandwagon.

After getting back, I have lost 103 pounds, and just need to lose another 13 or so to get down to a normal BMI. All my blood test values are fantastic, and I believe getting back on WFPB turned my life around for the better.

I cannot imagine leaving the WFPB way of life, and I have turned into sort of a WFPB evangelist among my friends, some who tolerate it, and some who have actually been inspired by Dr. Greger’s first book and have started WFPB journeys of their own.

I was hoping his new book would have some more information on the best ways to lose the weight I still need to lose. However, like the song “Windmills of the Mind”, there are circles within circles, spirals within spirals, tunnels leading to tunnels of their own, and really not much conclusive, even after reading almost 600 pages.

I am glad he pointed out that calories are important for losing weight. Of course I did know that. And I am glad he confirmed my suspicion that intermittent fasting is no more useful for weight loss than general calorie restriction. But overall, I really didn’t learn much new.

His style of writing makes quick skimming all but impossible. That’s because he loves teasing you with possible scenarios, and then talking them down with his research analysis results. It’s hard following his train of thought sometimes. And his endless use of analogies drives me crazy. I keep on thinking, “get to the point already!”

The only thing new I really learned was that he feels that front-loading your food by eating your large meals earlier in the day and having a light dinner seems to change the way calories are metabolized. Chef AJ has been saying that for some time, but he presented research supporting that idea.

And he also claims that we should stop eating after 7 pm and that, too, somehow helps with net calorie reduction and metabolism.

But beyond those two points – in nearly 600 pages of convoluted discussion – I didn’t find much useful in the book, to be honest.

A friend of mine asked me yesterday if she should get the new book because she wanted to start WFPB and needs to lose 60 lb. I think I was fair in my reply that she should start with the original “How Not to Die”, which is much more informative, and then tweak from there, as I have done.

There are probably lots of you who will disagree with me. But that’s my conclusion after reading both books.