Last year I had the pleasure of attending the Hibikinokai Christmas party in Hachioji. Hibikinokai is a non-profit organization for handicapped people in the area who are interested in studying English conversation and how to use computers. It was founded by my friend, Walter Spillum, many years ago, and has scores of members who participate in their weekly classes and seminars.

This year they allowed me to take part more actively,  and I got to lead the attendees in “The Twelve Days of Christmas,” and filled in for Walt’s brother Jack in calling the Bingo numbers, because he was unfortunately unable to attend. My friend Dave Fisher was also unable to attend this year because he is laid up in the hospital having his knees looked at. But both will be in attendance next year.

A certain portion of the group are blind, so I got some braille copies printed up, and for everybody else bilingual English and Japanese lyrics. I think the Japanese was ok. Things might have gotten a bit iffy around “Ten lords a’leaping” (especially when I tried to demonstrate) but people joined in and seemed to have fun with it.

Here are some photos and videos from the event. I didn’t get a photo of the amazing magic performance by Hiroshi Takagi (I want to know how he did that trick with the wine in the cups!), and I don’t know if anybody recorded me at all, but here are a few highlights.

The party was on the 10th floor the Create Hall community center near Hachioji Station, where the Hibikinokai meets every Sunday. It was a beautiful, brilliantly clear day, and you could see Mt. Fuji covered in snow from the windows. 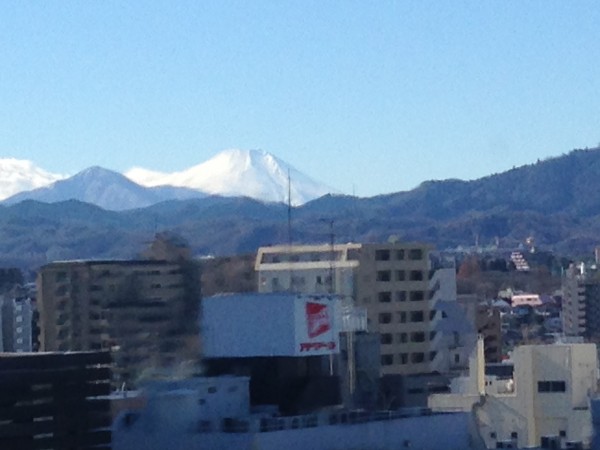 Walt and others signed people in at the reception desk in the elevator lobby. 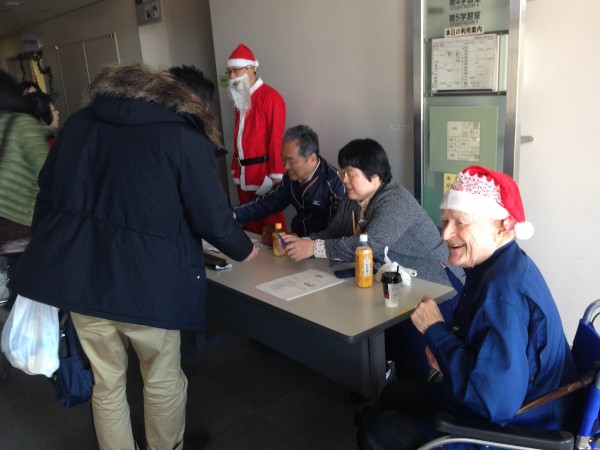 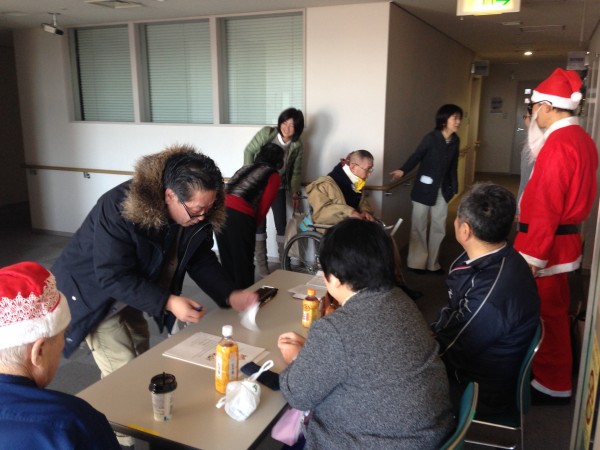 Of course Santa Claus was on hand. 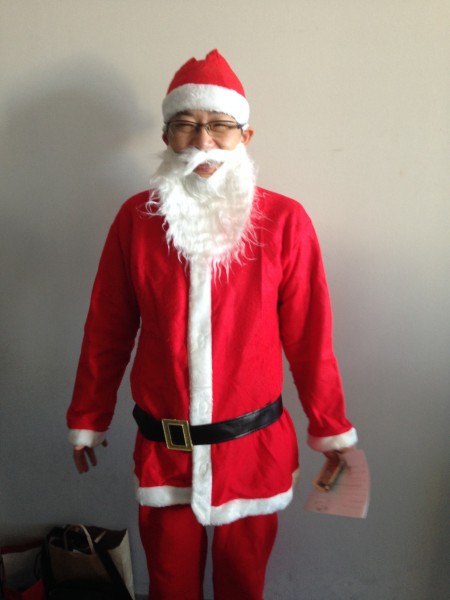 Here is part of the group  of attendees. 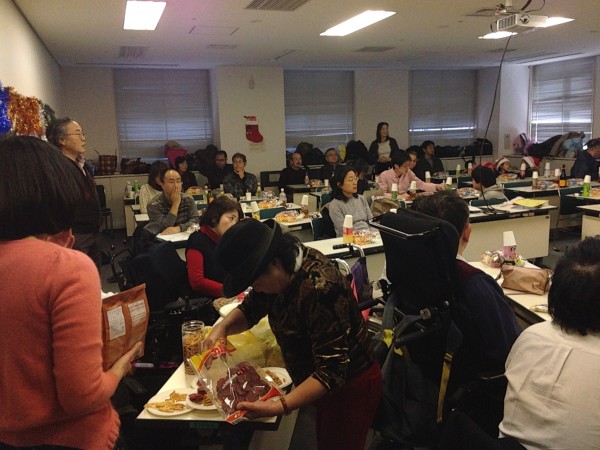 This is a panorama of the whole group. Tatsui-san, who is head of the Hibikinokai is in the middle directing the arrangements. If you click this picture you can see the original – which is much larger.

Walt gave a very moving welcome speech. Below the photo is a video of the speech. It’s worth listening to. 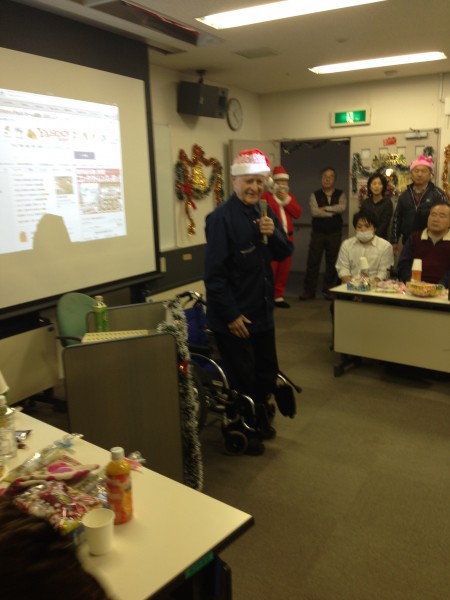 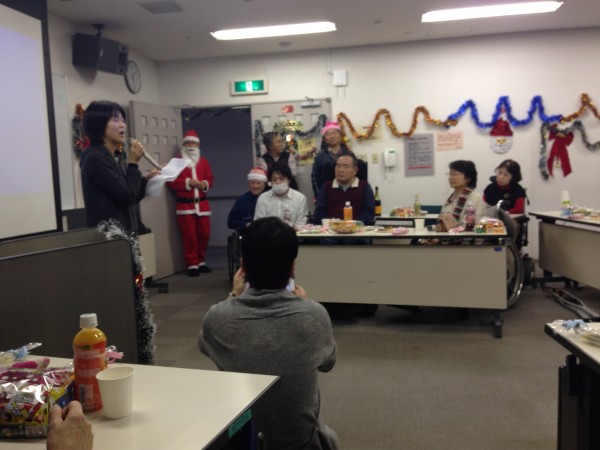 Hemmi Yasuyo returned again this year with sentimental jazz and Christmas songs. Below the photo is a video of her performance of “Memories.” And if you missed it last year, you have to watch her performance of that Christmas Classic “Bei Mir Bistu Shein.” This panorama is also linked to the large original – click on the photo to see.

After the party, a group of us had a second party (it’s a Japanese tradition) at a cafe near Hachioji Station. 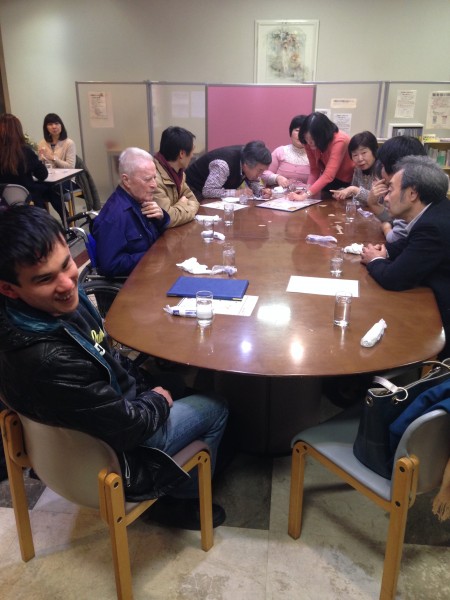 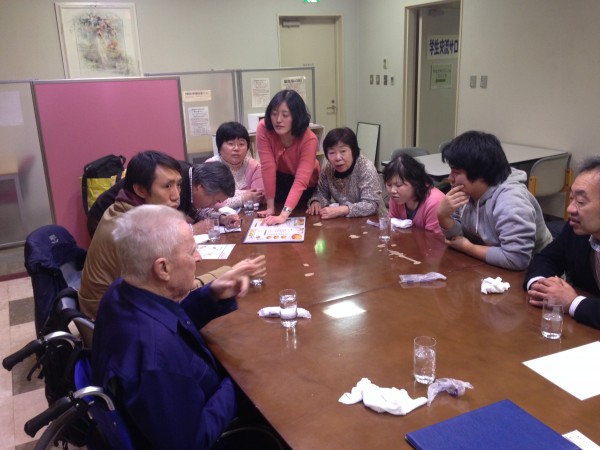 And when it was all done we headed home. Here are 4 of us on the train together, getting off at different stops. From left to right, Masae Kashiwagi, me, Saya Suzuki and Koji. 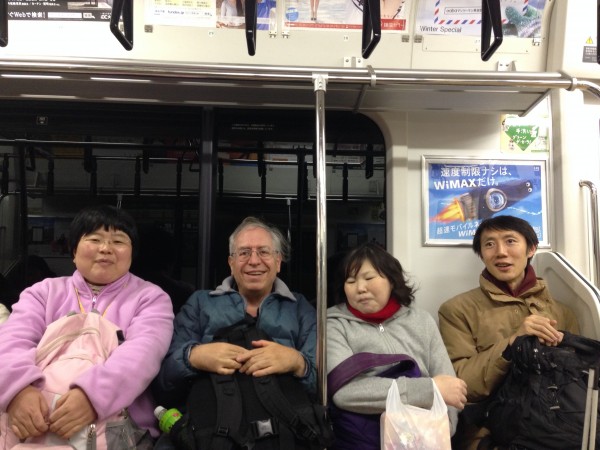 I hope I get to meet everybody again soon! I could not have had a better time, or met a nicer group of people. I feel I made some good new friends. The entire day felt warm and good all around. Thank you, everybody!