Today I needed to run some errands, including sending a package from the post office on Chouteau. Chouteau is on historic route 66, so I took this picture from the car this afternoon. 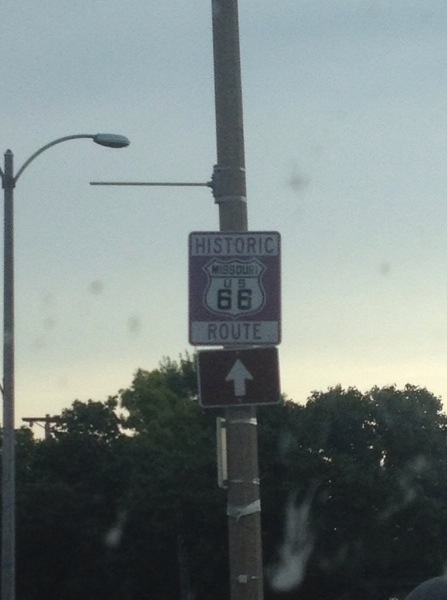 In front of the post office, I realized I didn’t have change for the parking meter. I didn’t want to get a parking ticket (been there, done that) so I called across the street to some friendly looking guys sitting in a car and asked them if they had change for a dollar.

They didn’t, but they didn’t want me to be stuck, so they looked around and found a dime and a nickel and said here you can just have this.

So I fed the 15 cents into the parking meter, and went into the post office and sent the package. When I came out, I noticed the guys were still there, and I felt like I wanted to give them something for being so nice.

I rummaged around in my wallet, and found a 5 yen coin tied to a nice Japanese-style rope in a plastic envelope. I can’t quite remember where I got it from – probably a present from one of you reading this. Sorry!

Anyway, I approached the guys, who now were moving some barracades across the street, and I explained I was visiting from Tokyo, and I wanted to give them something because they were so helpful, and I explained what it was.

They really liked it, and then they told me what they were doing was setting up for the World Naked Bike Ride in St. Louis.

It will be tomorrow night between 5 PM and 9 PM, and they told me I should be sure to drop by!