A friend recently gave me a fascinating pocket watch that keeps Edo era time (Edo no Koku). Take a look at the photo. It is really amazingly intricate and complicated and interesting. 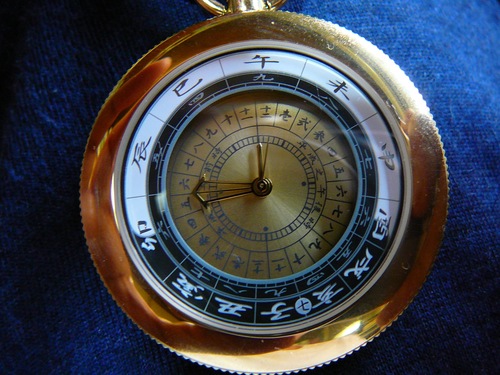 The way time in the Edo era (1603 – 1868) was kept is so convoluted and bizarre, to our modern way of thinking, it took me a couple of days just to figure it out.

Take a look at the attached photo and try to follow along and let’s keep Edo time together!

First, for convenience, the watch also keeps modern time, which was introduced in Japan in Meiji 5 (1872). The inner ring of numbers is a 24 hour modern era clock number 1 through 12 in kanji, and then 1 through 12 again. The left hand side is AM and the right-hand side is PM. The long hand in the photo shows just after 6 am (just past the 5 and 6 border). The smaller thick hand is the minute hand and it is just a standard reading of 60 minutes around the clock – each small black circle marks off 15 minutes, each dark black tick mark is 5 minutes and the light tick marks are 1 minute each.

The thin hand is the second hand. The next circle out is a ring showing the juunishi (the 12 characters of the oriental zodiac) and for each character there is a number, also in kanji. This is where is gets interesting.

Day and night were divided into 6 intervals, or hours, each. It is an oversimplification, as some do, to say that because we have 24 hours and in Edo they had 12 hours that each Edo era hour was about 2 of our current hours. That is oversimplified because, of course, daylight and nighttime depend on the season. So the length of the hours change depending on the season and whether it is daytime or nighttime. This is called futeijihou in Japanese. futei means “non-fixed” and jihou means “time method”. The fu in futei is an “opposite” or “negation”, so modern time is called teijihou, or the “fixed time method”.

In the photo, daylight hours are in white and nighttime hours are in black. Because the amount of daylight, and thus the length of the hours themeselves, changes with the seasons, the outer ring must actually be replaced on the 7th day of each month. The watch comes with a set of 12 replacement rings for this purpose.

And now for some more fun! The way the hours themselves are counted is even stranger. Let’s start around the clock, from the first daylight hour, on the left. The big character shown half in black and white on the left side of the outer-most ring is “u”, which is rabbit in old kanji. So this hour is called u no koku – hour of the rabbit.

koku is a word for time. The word “no” is just a particle, like the possessive apostrophe in English. Thus u no koku is rabbit’s hour, or hour of the rabbit.

The number below the u chacter is the kanji for the number 6. The 6 represents 6 bells that a shrine might chime to mark the hour. So the first hour of daylight is called either u no koku (hour of the rabbit) or yoake mutsu (number 6 since dawn, or 6 bells from dawn, or just “dawn 6”).

The word yoake, remember, means “dawn” (literally “day opening”) and the word mutsu is the ordinal number 6 (the counting number without a counter word). So dawn, this time of year, occurs about half way in the middle of yoake mutsu, the hour of the rabbit.

Looking at the inner modern clock, you can see this is about 4:45 am or so, which is correct. (The sunrise and sunset times are in Hyogo prefecture standard.)

And here it gets weird again! The next outermost character, at the top of the clock, is the character for horse – uma. So it is uma no koku, hour of the hourse. It is yoake kokonotsu which means….. Dawn 9. Yes, nine. Not 3. There is no 3. In other words, the hours start at dawn and the daytime hours are 6, 5, 4 then 9, 8, 7. Then at night – higure (sunset) – they start counting from 6 again! Don’t you just love it!

You can see on the watch that higure (sunset) is on the right side, down from the horizontal – where white turns to black again. That outermost character is tori, meaning bird. So sunset occurs during the hour of the bird, higure mutsu (sunset 6).

Looking at the inner ring, day becomes night around 6:30 pm in modern time, which is correct for this time of year (it gets darker earlier here than in the U.S.). The complete list of times, starting from dawn and working around are:

* yoake itsutsu (dawn 5), tatsu no koku (hour of the dragon)

Another aside: For those of you who like Japanese snacks, you will know these are called “oyatsu”. Many Japanese people even do not realize that the word oyatsu comes from this Edo era time of the day – about 3 pm in the middle of yoake yatsu – when it is common to have tea-time and snacks.

The next hour marks the end of daytime and the beginning of the hours after sunset (higure, literally “the coming to the end of the day”), and the counting starts over with 6:

* higure nanatsu (sunset 7), tora no koku (hour of the tiger)

Then it starts over again with yoake mutsu – dawn 6, which is, as you know by now, u no koku – hour of the rabbit.