Yesterday I was all gloomy and wallowing in existential angst over being too materialistic while overlooking the important things in life.

This morning the doorbell rings, my new iPhone 6 Plus arrived from AU and I debated for a good 30 seconds about returning it unopened, and then forgot about philosophy and between work tasks opened the box and set it up.

How shallow does that make me?

The actual setup – the total down time while changing everything out from my iPhone 5 to the iPhone 6 Plus – was less than 30 minutes. And I have to admit I like it.

Relative sizes of the iPhones

This photo is sort of interesting. It shows, from right to left, the sizes of the iPhone 4S (the one I bought used off of Craigs List to use in St. Louis this summer), iPhone 5, iPhone 6 Plus and iHand. 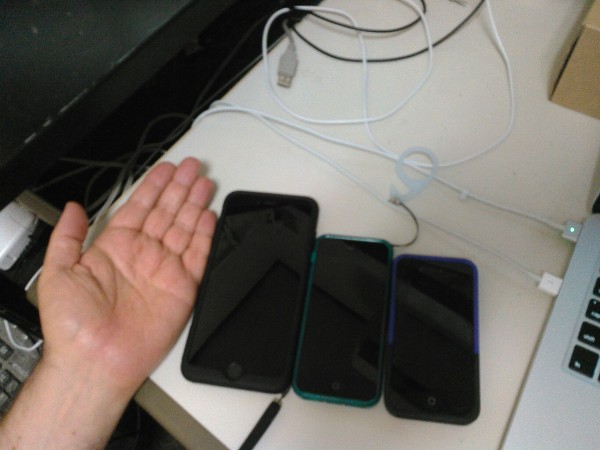 The traditional unpacking photos everybody loves to see 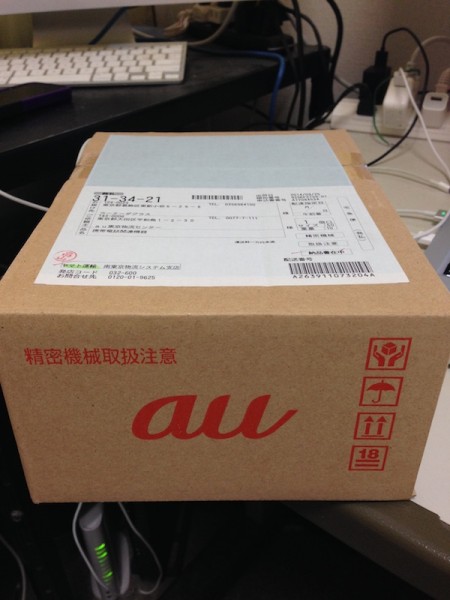 The box from AU the delivery person delivered this morning. 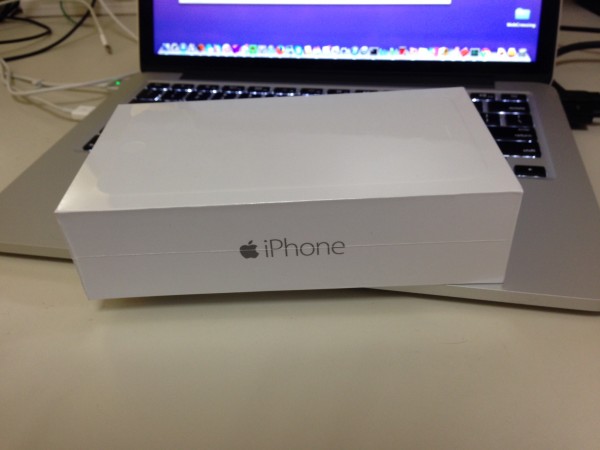 The iPhone 6 Plus box before opening it. 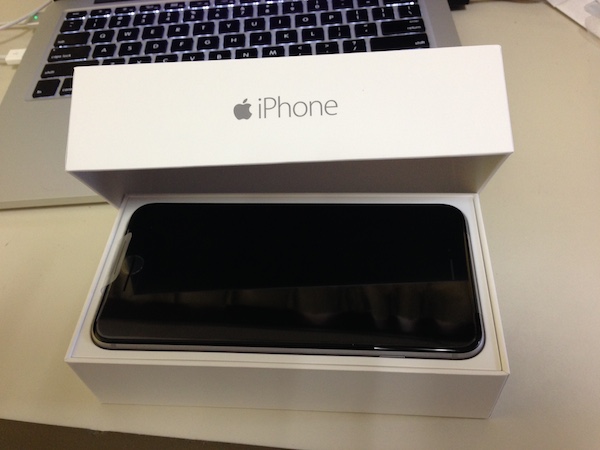 Taking the lid off the box. 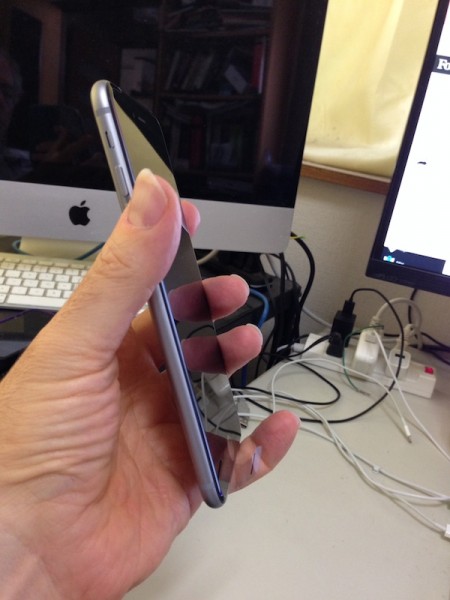 A profile view of the iPhone 6 Plus. Quite thin! 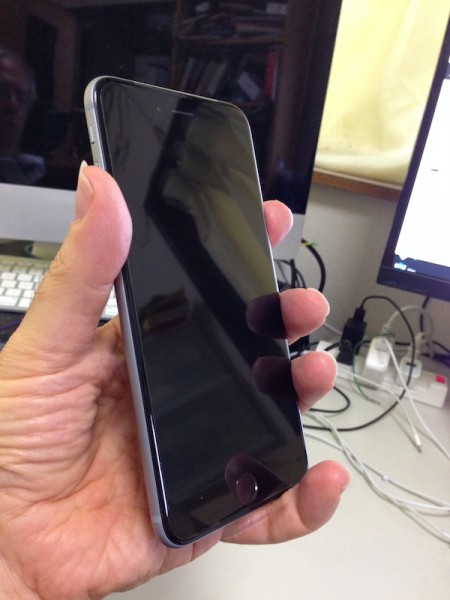 Another view of the iPhone 6 Plus in hand. 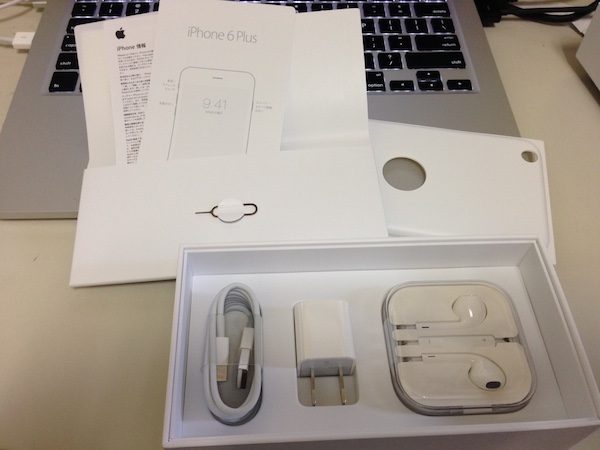 The rest of the contents of the iPhone box – lightning cable, adapter and ear buds. 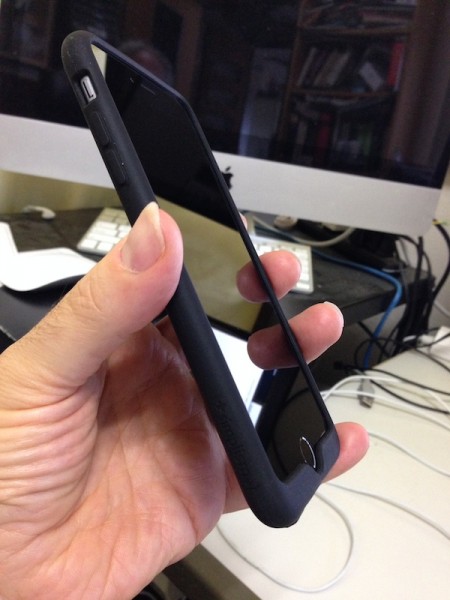 The iPhone in the protective case I bought the other day. 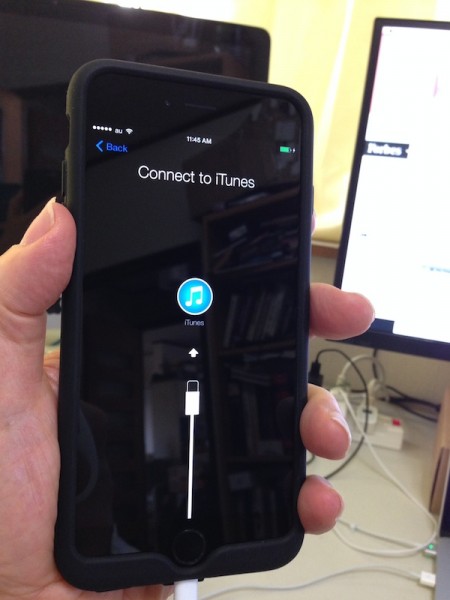 The SIM is in and it is ready for setup. 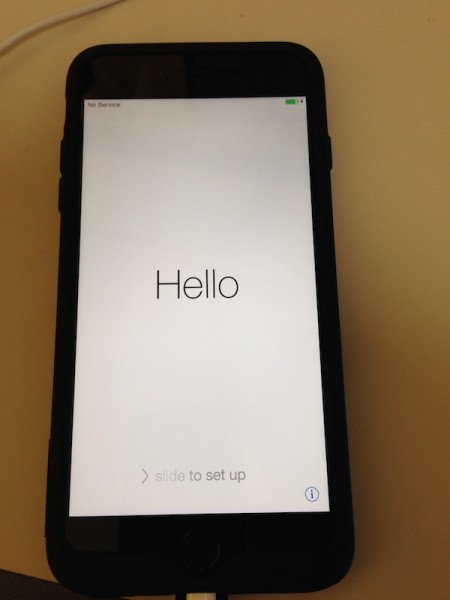 All ready to go.

The 5.5 inch screen, of course, is the big thing. And it is really beautiful. That was the first thing I noticed in the store. I already feel cramped when looking at my iPhone 5 screen, which itself was much nicer and larger than the iPhone 4S screen. The screen resolution of 1920 x 1080 pixels is incredibly clear. I’ve kept the display brightness at about 75% of maximum with auto-brightness on throughout the day and had no problems seeing it indoors or outside in the bright sunlight. The maximum setting is way too bright. I also ran a full set of “dead pixel” tests and there aren’t any. Of course, at this resolution it might not even be possible to see a stray dead pixel. Anyway, no problems there.

Note: Most apps which have not yet been redesigned for the new higher resolution screen don’t show extra content – they just show up larger. In some cases that is actually nicer. For example, the buttons on a calculator app I like to use are easier to press now.

Also, for people with older eyes, you can set either a standard or zoomed mode. The zoomed mode displays everything in the lower resolution of the iPhone 6, so everything appears larger. But I’m using the standard mode for now.

It’s still hard to judge. It hasn’t even been a full day. Currently,  the device is at 50% with 4:27 hours usage and 6:55 hours of standby. If that trend holds, that multiplies out to about 9 hours of usage during 14 hours of standby. But I don’t believe the usage is completely linear. The rate of remaining battery loss seems to accelerate over the hours for some reason I don’t understand. I’ll have a better idea of the true battery life as it gets closer to being depleted. I don’t see any particular problems here, but the battery life is certainly not as good as an iPad. My guess is that it will end up being about the same battery life as the iPhone 5. I’ll report more on this again.

A note about the LINE app

I still use the popular LINE chat app, and I’m happy to report that everything transferred over to the new device just fine. Nothing seems lost. Interestingly enough it is still working on my iPhone 5 as well, even though it’s not supposed to be capable of running on two mobile devices at once. The content is on both devices. But I don’t expect anything to stay synced.

This was my first experience in using Touch ID, and it is seriously cool.  For those not familiar with it, you record your fingerprint (or more than one if you want to use different fingers) and it gives you access to your iPhone so you don’t have to leave it unlocked. For most things you don’t have to enter your 4-digit password code anymore. Some friends of mine don’t even use a password and leave their iPhone 5s unlocked all the time so they don’t have to bother with the 4-digit code. But with Touch ID that isn’t necessary.

So the device is generally more secure, without inconvenience.  Even with “instant locking” every time the display goes dark, you still have quicker access than before to the home screen because you don’t have to “slide”. You just tap and then your fingerprint is detected and you are in. And you can optionally use Touch ID  for iTunes purchases as well. So no more entering your password all the time in iTunes.

The speaker is better than on the iPhone 5. Though it is still a cell phone speaker, with sound quality issues inherent to its size, it is clearer and louder. While cycling today along the Nakagawa, I could clearly hear MapMyRun’s speed reports every kilometer. And music sounds fine to me too.

There is a new landscape mode for the home screen. It is interesting, though I haven’t made much use of it yet.

More interesting is landscape mode in Mail. You now get a split view (message list and the message you’re reading) like on the iPad. That’s useful.

And the landscape mode keyboard is also different and improved, with more features (see the screenshot). This isn’t a general iOS 8 improvement. It doesn’t appear on my iPad or iPhone 5. 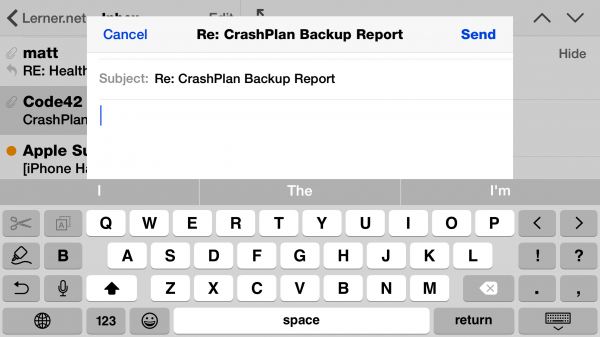 The keyboard in landscape mode.

The iPhone 6 Plus running hot has been mentioned on the Internet. I am not experiencing a heat problem. I backed up my iPhone 5 in iTunes, started up the new phone and restored from the encrypted backup. While everything was getting set up the iPhone did get noticeably warm. But as has been reported elsewhere, after things settle down it ran cool for the rest of the day.

The weight of the new iPhone 6 Plus (172 g) was a concern for me. The iPhone 6 Plus weighs 53% more than the iPhone 5 (112 g), while the iPhone 6 (129 g) only weighs 15% more. It doesn’t seem like it’s turning into an issue for me though. It feels comfortably light when holding it and using it. And it’s a lot lighter than my Nexus 7 Android tablet, which weighs 290 g. I do notice it some when carrying it around in my shirt pocket though, which I don’t notice when carrying the iPhone 5.

It really is in-between a phone and a tablet in size and weight, thus the coined phrase “phablet.” The weight is much closer to a phone than a tablet though, so it doesn’t feel out of the ordinary. There are many Android models on the market now which weigh as much or more. Like my friend’s new Japan model Kyocera Torque weighs 182 g. It is designed for ruggedness though. The Samsung Galaxy Note 4 with a slightly larger 5.7 inch display weighs 176 g and has a higher resolution and more RAM.

People don’t just decide on these kinds of purchases based on raw hardware specs though. The Apple ecosystem is quite nice, and things sync well across devices. The fact that my total down time when upgrading was less than 30 minutes, for a complete restore of everything to the same positions with all the passwords intact says something. And if you are a Mac user, there is even more cohesion throughout the unified system.

That said, I can certainly see where Samsung and LG are also attractive at this level, and my hope is that the competition keeps everybody making better devices. This time around it can be argued that Apple basically stole some great UI and feature ideas from Android. Certainly we would not be seeing such things as the ability to replace the default keyboard in iOS if it weren’t for competition from Android.

You’ve seen the parodies. And the size was both the major attraction and the biggest concern to me. I really like the big screen when using it, and now don’t want to go back. But you can’t have a big screen without it being, well, big.

Maybe someday that will be solved with folding displays, or Google-glass like devices, or brain implants. But for now if you want a bigger screen your device is going to be bigger. I have to admit it looks a bit awkward from the outside. And I can see why it might not be the device of choice for people hesitant about going the phablet route. And truth be told I feel a bit self-conscious with it in public. But the screen is so nice (and the camera has some features the iPhone 6 doesn’t have) and so I’m happy with it.

Bendgate and how you carry your iPhone

You have all heard about “bendgate” by now – the reports that the iPhone 6 Plus can bend if you apply enough torque to the frame, or stories about people having it bend when it is in their pants pocket. And there are some funny parody videos and ads out about it.

Apple came back with some convincing information today. They said of the millions sold, only 9 people so far had reported a bending issue to them. And they gave a lot of details about the stress tests they put the new iPhones through – including real life usage tests simulating carrying the iPhone in your pants 15,000+ times. And they detailed the materials used to keep it strong.

This article provides a lot of information about what Apple released, including showing off its testing areas.

My own opinion is that this issue was not enough to dissuade me from keeping the new iPhone 6 Plus. For one thing, I know when something goes wrong (and it will, it always does with Apple products I purchase) that AppleCare will take care of it. I’ve had my iPhone 5 exchanged twice so far under warranty because of home button problems.

And the article linked above seems convincing to me. Apple seems to be going overboard to avoid having this controversy drawn out.

Finally, I have to say, that if you put your iPhone in your back jeans pocket and sit down on it, well, what do you honestly expect to happen to something made of aluminum and glass? I have never carried any phone in my pants pocket because I just assumed at the minimum it would get scratched up there.

Yet it does seem a majority of people, according to surveys, do carry their phones in their pants pocket, back or front. So real life testing of those situations is important. Anyway, because of the response from Apple, and because of the way I myself carry my iPhones, this was not an issue for me. But some of the joke sites about it are funny.

I really like my iPhone 6 Plus so far. Technically I have had no problems. I love looking at the new screen. The weight is “ok.” The size makes me feel a bit self-conscious but looking at the screen makes it worth it.

And there are my first day’s impressions. I’ll probably have more to add in later days!