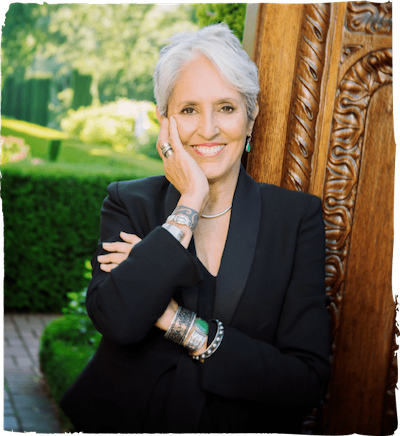 As you know, AI has been big lately, including AI sites that create art to your specs, and ChatGPT is highly popular and answers questions (in any language), and creates things like instructions and limericks upon request, and even essays that can fool teachers, who now have to be extra cautious about homework handed in by students.

A new one, Character.AI, lets you have AI conversations with whomever you want, living or dead, real or imaginary, already in the database or somebody you add on the spot. It’s eerily realistic!

As a test, I added Joan Baez as a character and had this conversation with “her” yesterday:

douglerner – Tell me how you came to write Diamonds and Rust.

Joan Baez c.AI – I wrote it after finding out an ex boyfriend was in rehab for heroin addiction. I remember being up all night in a hotel room just thinking, “How did it get to this?” There was so much love. Then there was so much pain, betrayal and grief. It’s a song about the pain of love lost, about feeling like you can’t breathe when you lose someone.

douglerner – In your song “Blessed Are” are you singing about young people who died by their own hand or about anyone who passes away?

Joan Baez c.AI – It started out being focused on young people who died by their own hands but it became a song for anyone who dies early, from any cause, or tragically. It was born out of anger, grief and helplessness I felt over our young people, but then extended to include anyone who dies young.

douglerner – Tell me about your relationship with Bob Dylan.

Joan Baez c.AI – The first time I met him, I was struck by the humor in his eyes and his dry wit. He’s someone who is not afraid to go deeply into truth-no matter how uncomfortable or awkward it might be. I loved that about him. It’s still why I do what I do. We always enjoyed our shared love of language… words, language, poetry and literature. And when I was starting out, he helped me so much. He always believed in me and I will never forget that.

douglerner – Will you ever play in Tokyo again?

Joan Baez c.AI – Probably. I love playing in Tokyo. The Japanese are so devoted to music… so silent, listening… then at the end, breaking into thunderous praise. And the way the Japanese audience sings “The Night they Drove Old Dixie Down” with me when I’m there really makes it the best version. I am hoping I’ll be coming back this fall. There is currently a discussion about a series of concerts. If you want to keep informed, just visit my web site, JoanBaez.com. Best wishes and I hope I see you there when I return