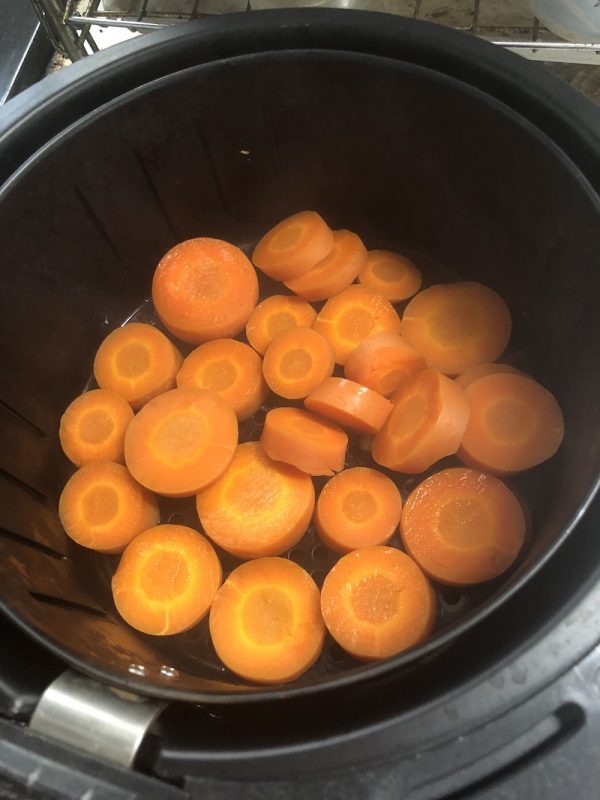 I have a confession. Until just now I had never cooked a carrot in my life.

I like carrots. I often eat them. Usually in bags of frozen mixed vegetables. Or if they have baby raw carrots at the supermarket I’ll have those. But I’ve never cooked them before.

Anyway, since the only thing I’ve ever made in my air fryer are potatoes, today I decided to take up the challenge and air fry carrots!

In the first picture you see the two carrots I chose. I didn’t want to peel them, so I decided to use my potato scrubber and just washed and scrubbed them. Then I cut off both ends.

After that, I sliced them and let them simmer in water for a little over four minutes.

Then I put them in my air fryer, and cooked them on vegetable mode, which is 17 minutes at 160°C.

You can see how they came out. I would say they were “OK.”

They were certainly edible, and they had a good carrot flavor.

Next time I might try cooking them on potato mode, which would be 20 minutes at 200°C. I would say maybe they were slightly undercooked.

I ate them with some sprinkled ginger on top and a little bit of catchup. I know it sounds strange, but it was pretty tasty.