I’m officially worried about Hao-chan. There is something… off. He doesn’t seem specifically ill. But:

On the other hand, if I call him he’ll fly over to me. So he doesn’t seem to be weak. He flew back to his cage after I took this picture and went to sleep on the top perch. But when I called him he did fly over again and land on my hand, where he is right now. But he went to sleep again.
He has a normal appetite. And he takes baths every day and seems to enjoy them. And he doesn’t seem to be in any discomfort.
But something is off. I know he’s getting older, but he’s just 5 1/2 years old. So he’s, well, not “young” but he’s just in early middle age.
I would bring him by the vet, but I don’t think he’s that expert on tiny birds. Plus during office hours it’s so hot outside I’m afraid I might make things worse.
Anyway, I’m just sort of worried about him…
doug 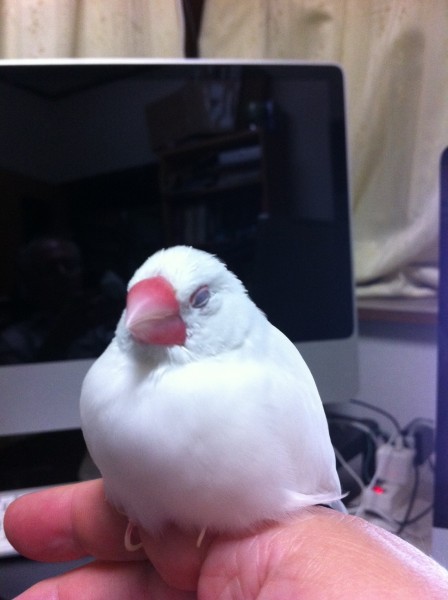